BBC and New Line (and HBO?) to adapt HIS DARK MATERIALS for television

The BBC has confirmed that it will be developing a TV series based on His Dark Materials, the bestselling children's novel trilogy by Philip Pullman. The books were previously adapted for a film, The Golden Compass (2007), but this was not successful enough to warrant sequels. 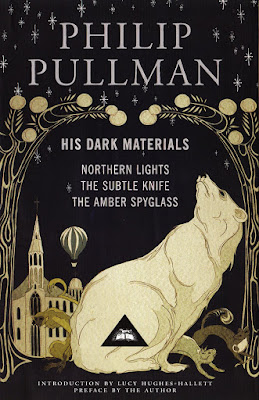 The novels in the series consist of Northern Lights (1995, retitled The Golden Compass in the USA), The Subtle Knife (1997) and The Amber Spyglass (2000). The books have sold just under 20 million copies and form arguably the most critically-acclaimed YA fantasy series of recent times. The books tell the story of Lyra Belacqua, a 12-year-old girl who grows up in an alternate-universe version of Oxford. As the story continues Lyra encounters sentient, armoured polar bears, travels between several parallel universes and becomes embroiled in an epic battle for the fate of creation.

His Dark Materials has been acclaimed for making a readable and entertaining story out of very weighty topics, touching on original sin, religion and faith. The trilogy is effectively an inversion of Milton's Paradise Lost, but celebrating the things that Milton criticised in that novel. It was also partially inspired by Pullman's dislike of the heavy Christian allegory in The Chronicles of Narnia, particularly the nihilistic ending to the series. The trilogy has been acclaimed for its narrative weight, but has proven controversial in Christian circles for taking a critical - or at least non-laudatory - viewpoint on Christianity specifically and religion in general. An organised Christian campaign to boycott the film has been partially blamed for its lacklustre box office performance in the United States.

The new adaptation is planned to take the form of five eight-episode seasons from Bad Wolf Productions, headed by former BBC executive Jane Tranter (credited with taking the formal decision to return Doctor Who to television in 2003) and ex-Doctor Who producer Julie Gardner, working in conjunction with New Line Television, the first TV venture from the film production company responsible for The Lord of the Rings trilogy and the Golden Compass movie. Bad Wolf Productions has also announced an American rights partnership with HBO, suggesting that HBO may be contributing to the budget of the projects Bad Wolf are developing. This alleviates the concerns that the project may not get the money it deserves.

This is a hugely ambitious project and the notion of the BBC, New Line and possibly HBO joining forces to bring it to the screen is very exciting.
Posted by Adam Whitehead at 21:11

I own the series, so PP has my money there. But I will say it went downhill fast. The first book had great touches of wonder in it. But the further is strayed away from it's model, Narnia, the less enjoyable it was. Don't ask me what that means.

The whole series as a whole is a reminder of not letting ideology get in the way of writing an entertaining story.

There's no sex in the last book. And combating the idea that a "loss" off innocence must be sexual is exactly why these books are so important.

Yeah, I liked the books and I could say they played an important part for my teenage self trying to find his own beliefs... but in parts Pullman got as preachy as Narnia and that dragged the series down quite a bit