In the year 2122, the deep space freighter Nostromo is diverted to Zeta Reticuli to investigate a beacon of unknown, possibly extraterrestrial, origin. The crew find an enormous derelict spacecraft, its cargo hold filled with eggs. A strange parasite attaches itself to one of the crew, beginning a nightmarish journey for the rest. 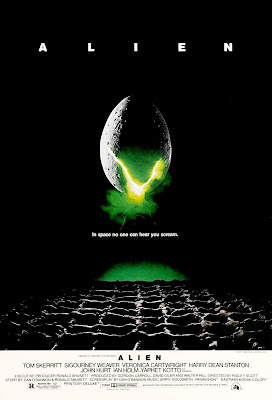 Reviewing Alien at this point is akin to reviewing the Bible, or Harry Potter: you've probably already digested it and can recite it line for line, or you've already decided it's not for you and you're probably not going to get round to checking it out.

For the minuscule number of people still on the fence, Alien more than deserves its reputation as a slow-burning masterclass in tension and pacing. Whether it's Ridley Scott's greatest masterpiece or not can remain the subject of hot debate (with at least Blade Runner making a convincing case not), but it's certainly up there in importance.

The film has numerous strengths: the industrial, low-fi sets and aesthetic were revolutionary for its day and remain impressive today. The characters are somewhat lightly sketched but the actors inhabiting them are so good that it doesn't matter, and they bring them to life with, in some cases, just a few lines of dialogue in the whole film. One of the film's more underrated aspects is that Scott doesn't let the camera linger on any one character too long, meaning that even identifying the film's protagonist and most likely survivor is extremely difficult (at least not without pre-knowledge about the franchise, which is almost impossible to avoid today), greatly increasing the film's tension.

The design of the xenomorph (courtesy of macabre artist extraordinaire H.R. Giger) remains nightmarish and striking, although it has to be said that the suit doesn't quite survive scrutiny in the high-definition era (particularly the chase sequence in the ventilation ducts). Fortunately, this was a concern of Scott's even in 1979 and the creature is wisely kept in the shadows and on the edges of the frame in most cases, so the "man in a suit" issue doesn't really come up.

The film is also very well-paced, with the tension building over the opening section of the movie and the alien kept firmly off-screen until the second half. The idea of the creature stalking the air ducts and hiding in the ceiling fills scenes with a near-visceral sense of dread, so powerful that Creative Assembly achieved tremendous success in copying the format for their 2014 video game Alien Isolation. Scott's use of lighting and camera angles is masterful.

The film does have a few minor blemishes. The model work is pretty ropy, which a few years earlier it could have gotten away with. But filmed a year after the release of Star Wars and having a comparable budget, there really isn't any excuse for the often-underwhelming establishing shots of the Nostromo (even more disappointing given how fantastic the design is), which at their weakest have a little bit of the feel of Blake's 7 to them. However, Alien is not supposed to be a special effects extravaganza and the low-fi feel to the effects does help with the old-school horror vibe of the film. I've also never been a fan of Alien's soundtrack: the main, stripped-back theme is fine but the incidental music throughout the film often feels incongruous (and well below-par for Jerry Goldsmith) and at times disrupts the film's atmosphere.

Minor criticisms aside, tremendous tension, expert pacing and finely-judged performances combine to make Alien (****½) one of the greatest science fiction horror hybrids of all time. There are a few cracks where it's starting to show it age, but overall this is a very strong movie.

A note on edition: there are numerous editions of the Aliens movies available. Probably the best is the Alien Anthology Blu-Ray box set, which features both the original cinematic editions and extended versions of all four main-series Aliens movies, complete with tons of special features. This is available now in the UK and USA.
Posted by Adam Whitehead at 19:55

Alien is so ingrained in the public consciousness that watching it for the first time wasn't much of a surprise, outside of wondering what the deal was with that dead elephant guy. I'd argue The Thing holds up much better as a horror movie, I only see Alien as a sci-fi classic with minor spooks.

I think that Alien has achieved lasting influence mainly because it does such an effective job at tapping into our shared unconscious fears of parasitism and body horror (the facehugger was intended as a metaphor for male rape), as well as the Lovecraftian notion of the universe as inimical to humans. It's also a good old-fashioned haunted house story, but solves the plotting problem of "why don't they just run away?" by putting the house in an unsurvivable environment.