Los Angeles, 2019. The Earth is grimy and grim, covered with vast cities of towering skyscrapers. Most animal life has been wiped out, replaced by expensive synthetic counterfeits. Counterfeit humans - replicants - also exist, carrying out dangerous, dirty work in the offworld colonies. For security their lifespans are limited to just four years. Four replicants have come back home, seeking to extend their lives. A replicant-hunter, a blade runner, is sent to stop them. 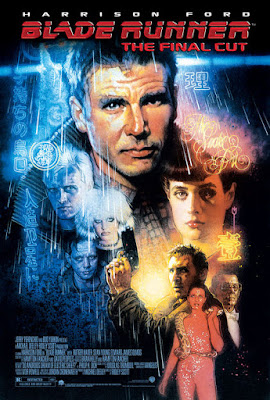 Blade Runner was released in 1982, a movie by Ridley Scott based (loosely) on Philip K. Dick's short novel Do Androids Dream of Electric Sheep? The film had an initially mixed critical reception, but this improved with the release of the 1991 Director's Cut, which restored a subplot raising the question of if the central character of Rick Deckard (Harrison Ford) is himself a replicant. This cut also removed a series of unnecessary voiceovers and a studio-mandated "happy ending" that Scott had hated. In 2007 this version was superseded by the Final Cut edition, which restores some more scenes and tweaks others whilst completely digitally remastering the film in proper high definition (with eye-popping results).

The power of Blade Runner does not lie in its story - which is slight - but in its visuals, atmosphere and in its thematic exploration of the nature of what it is to be human. The replicants appear to be intelligent, sentient and capable of emotion, so the decision to use them as slaves is morally dubious; on the other hand they are also capricious, child-like and do not have an innate value for human life, killing those who oppose them with ease and ruthlessness. Deckard starts the film as a man of apparent moral certainty, willing to execute replicants. His meeting and association with Rachael, a cutting-edge replicant with much more human characteristics, raises doubts in him about his certainty that the replicants are soulless machines that need to be put down.

This is mirrored in the story of Sebastian (William Sanderson), who has a terminal disease and is spending his dying days creating new replicant technology for the Tyrell Corporation. This gives him tremendous empathy with the replicants, who are likewise doomed to die far before their time, and explains why he wants to help them (a decision he later comes to regret). This storyline is not as explored in as much depth in the novel - where a character named Isidore plays the same function and has a bigger role - but it does give some humanity to the replicants.

These themes of using artificial life to question what it means to be human would be revisited just a few years later in the character of Data in Star Trek: The Next Generation, but much more powerfully in the 2003 reboot of Battlestar Galactica (which also inherits Edward James Olmos as an actor and the term "skinjobs" for its replicant-like artificial lifeforms).

The movie's most enduring quality is its startling visuals: the vast, towering blocks of Los Angeles, the flames roaring into the sky from towers, police cars flying in front of colossal advertising hoardings. Disregarding realism (even in 1982, the idea of earthquake-prone Los Angeles looking like this just thirty-seven years later was a stretch), these visuals have lost none of their power and have even gained new power through their high definition remastering. Backed by Vangelis' haunting score, the sweeping effects shots of the city remain powerful and arresting in a way that the disposable CG cityscapes of modern SF movies cannot match. But beyond the effects footage is the minimalist way Scott shoots his futuristic, dystopian city, with dusty offices, bustling street markets and sparse apartments all looking amazing.

Performances are stripped-back, honest and raw: Harrison Ford, Sean Young, Daryl Hannah and Rutger Hauer all give career-best performances, whilst Edward James Olmos does a huge amount with a small amount of screen time. The film is sparsely-written, sparing with dialogue but making sure almost every conversation is important and memorable. This culminates in the movie's ambiguous and much-debated final confrontation between Deckard and Batty (Rutger Hauer), and Batty's soliloquy on his impending death and the loss of his memories, although he tries to impart some of these to Deckard through his "tears in the rain" speech.

For those who like their movies to be clear and unambiguous, Blade Runner will likely frustrate. This is a film designed to raise questions, engage in philosophical debates and have viewers revel in its slow-burn atmosphere and visuals. There are action sequences, but they are awkward, ugly and brutal rather than visceral and exciting. The so-called love story element is strange and questionable. The ending is ambiguous and, for some viewers, abrupt. But it's also a supremely assured film that is confident in its own ambition and executes it perfectly.

Blade Runner (*****) is strange, haunting and utterly compelling. There are numerous versions available, but arguably the Final Cut - DVD (US,UK), Blu-Ray (US, UK) - is the strongest, representing the director's clearest vision of the story.

A sequel, Blade Runner 2049, will be released on 5 October 2017 in the UK and a day later in the US. There are also three sequels in book form, written by K.W. Jeter, but these have been superseded by the new film.
Posted by Adam Whitehead at 22:53