Showtime have confirmed they are developing a prequel television series to Patrick Rothfuss's Kingkiller Chronicle novel trilogy. Lionsgate undertook a complex multimedia option on the series a couple of years ago, but picked up momentum a few months back when Lin-Manuel Miranda (Hamilton) was attached as a producer and musical director. 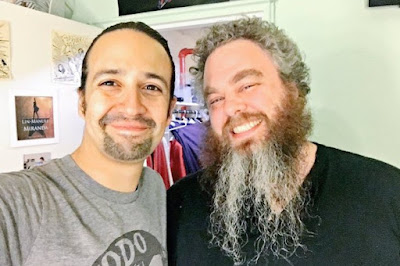 The plan seems to be for writer Lindsey Beer to adapt the three novels - The Name of the Wind (2007), The Wise Man's Fear (2011) and the still-unpublished The Doors of Stone (forthcoming, still) - as big-budget motion pictures, with a TV series intersecting the events of the novels but focusing on other elements of the story to be produced by John Rogers (Leverage). Miranda will produce and work on songs and other elements for both projects.

It sounds like the TV show will, at least initially, take the form of a prequel set a generation before the events of The Name of the Wind and will follow other characters through the world of Temerant. This plan gives Rothfuss additional time to complete the much-delayed third and concluding novel in the trilogy and reduces the chances of the adaptation running out of source material before it's done (as recently experienced by Game of Thrones).

The plan also encompasses video games, but no announcements have been made with regard to this part of the franchise.
Posted by Adam Whitehead at 20:39

It's a TV prequel but will at least 'initially' be set a generation before the events of The Name of the Wind? The word initially means that the series will eventually go into the books right? Sounds to me like it is a TV series with flashbacks. Would make some sense as the chronicle is basically a flashback.

Are they seriously going to make a prequel to a trilogy that is still unfinished, despite the first book coming out in 2007? This is just absurd.