Halloween, 1984. A year has passed since a young girl named "Eleven" escaped from Hawkins Labs into the outside world and unleashed chaos in her wake. Will Byers has been rescued from the mysterious realm known as the Upside Down, but is still suffering the consequences of his time there. The disappearance of Barbara Holland has also had unforeseen ramifications. The arrival of strangers in Hawkins coincides with a resurgence in activity from the Upside Down...and the beginning of an even larger, graver threat to the town. 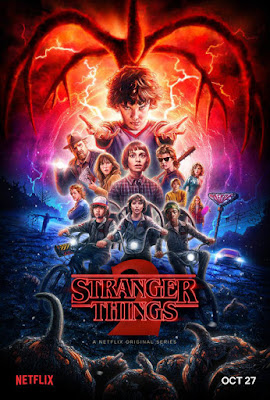 Stranger Things came out of nowhere last year to become one of Netflix's biggest-ever hits, a show that was both an indulgence in 1980s nostalgia but also remembered to tell a really good, interesting and brilliantly-characterised story at the same time. The renewal for a second season was both welcome, because this world is compelling and deserves more exploration, but also worrying, because Stranger Things had a story with a well-defined beginning, middle and end, and artificially introducing another mystery in the town might feel like a tacked-on move.

Fortunately, it doesn't. After a slightly haphazard start, Stranger Things 2 (the official name of the season, denoting that this is a proper sequel, not just a continuation of the first season) soon matches and, in some areas, outstrips its forebear. The Duffer Brothers made it clear that for this season they wanted to make a sequel along the lines of Aliens or Terminator 2: Judgement Day, a story with bigger stakes, more action and a larger threat, but also more compelling characters and greater emotional resonance. They bring in some new characters, expand the world further with more information about the Upside Down and the experimental subjects at Hawkins Labs (giving rise to a very good one-episode side-story set in Chicago) and also up the stakes in a massive way.

This increase in scale does not come at the expense of characterisation. In fact, the multi-pronged threat faced by Hawkins results in the characters splitting up into smaller teams to deal with what initially appear to be unrelated storylines. Nancy and Jonathan team up to find justice for Barb, Dustin and Steve join forces to tackle a new creature issue and Mike devotes his time to helping Will overcome his issues from the Upside Down. A bit like Lord of the Rings - or the later part of Aliens - the team is forced to split up only to rejoin forces later on for the grand finale...and it's a massive finale, with huge ramifications for the world.

The show's cultural touchstones continue, with more classic 1980s tunes being referenced, movies like Ghostbusters and The Terminator being namechecked and scenes being included which homage everything from Poltergeist to Aliens to The Goonies. The new castmembers include several shot-outs to the period, most notably the addition of Sean Astin (The Goonies, Lord of the Rings) and Paul Reiser (Aliens), albeit with both playing very well-rounded and interesting characters.

On the negative side of things, Stranger Things 2 does start to overdo it with the CGI. Season 1 made a point of not just being set in the 1980s, but even aping the style of a 1980s movie, with minimal CGI and the use of practical effects wherever possible. The second season has no truck with this, and CGI is used quite extensively. A lot of the time it's of the highest quality and the creature scenes would be difficult to do without it, but some CG establishing shots feel unnecessary. In particular, the use of CG to create school corridors in the Upside Down version of Hawkins feels a like a bit mid-2000s video game.

Still, that's a very minor complaint. Stranger Things 2 (*****) gives us greater insight into the existing characters, introduces interesting new faces and expands the world and scale of events whilst not selling out the show's heart and soul. The biggest question when the season ends is "now what?", because I can't see the third season getting bigger still. We'll have to wait until 2019 to find out the answer to that question. In the meantime, Stranger Things 2 is available to stream on Netflix worldwide.
Posted by Adam Whitehead at 21:02

I've decided not to binge the new season, and spread it out as much as possible this time. Really looking forward to it, sounds excellent.

Except for some clichés, It was a refreshing watch... I didn't like the parts depicting Nancy and Jonathan...

I think Season 2 was better than Season 1, but I would have probably put them at 4 and 4.5.

I found the Chicago detour to be fairly extraneous, but I suppose it might help lead into Season 3.