Thor, God of Thunder, returns home to Asgard with a mighty artefact and discovers that things are...amiss. Soon he finds himself imprisoned on the remote planet Sakaar along with his redoubtable half-brother Loki, pitched into fighting in a gladiatorial arena for the amusement of millions. Back on Asgard, the realm (and its eight fellows) stand in mortal peril due to the return of Hela, Goddess of Death. Thor must find a way of escaping, returning home and averting Ragnarok, the end of everything. 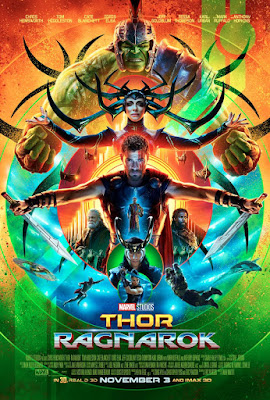 The Marvel Cinematic Universe has become a smooth conveyor belt churning out superhero action blockbusters, now up to three a year, reliable as clockwork. If it's a tribute to the powers behind this multi-billion dollar mega-franchise that they've never produced a truly awful movie (even Iron Man 2 and Thor: The Dark World are watchable, if mediocre), it's also damning with faint praise to realise they've never produced a single stone-cold for-the-ages classic either. After seventeen movies you'd expect at least one of them to be a genuine stand-out, but nope (The Winter Soldier and Guardians of the Galaxy Vol. 1 come close but ultimately no cigar). There is a Disney-Marvel formula and whenever they've hired a director who seemed in danger of putting too much of their own spin on things or adopting a more experimental approach, that director has gotten with the programme or been fired (such as the fate of Edgar Wright on Ant-Man).

From that perspective, Marvel's decision to hire New Zealand director Taika Waititi for the third Thor movie seems a bit crazy. Waititi is a free-wheeling comic genius, the director of movies such as Boy, Hunt for the Wilderpeople and, most hilariously, What We Do in the Shadows, a crowd-funded Spinal Tap with vampires. His approach to his films relies heavily on actor improvisation and experimenting with different ideas on set, ideas which seem antithetical to a $180 million CGI action fest where every scene is storyboarded to within an inch of its life a year before shooting starts. Indeed, when Phil Lord and Christopher Miller adopted the same approach to the Han Solo Star Wars prequel movie, they were fired. Watching Thor: Ragnarok, it's clear that Marvel stuck with Waititi for the simple reason that, as much as Waititi has made his mark on this film, Marvel has also made its mark on Waititi: this is very much a Standard Marvel Movie with the same basic structure and story beats that we've seen sixteen times before, just with a couple more genital jokes than usually get thrown into the mix.

Structurally, the film is a mess. Typically, a film's opening will establish the premise and backstory of what's going on, either by itself or through entertaining plot action. Ragnarok's opening takes in a planet that looks like Hell with scenes set in Norway, New York and on Asgard and a completely pointless Doctor Strange cameo before the story really even kicks in. Once it does, we follow two plot strands, one with Team Thor on the planet Sakaar trying to escape from the Grandmaster, and another on Asgard as it comes under attack from Hela and the established B-cast from the previous movie (led by Idris Elba's Heimdall) try to hold her off until Thor gets his act together. This would be fine, except that the Sakaar interlude goes on way too long, leaving the resolution on Asgard to take place with almost indecent haste.

There are some benefits to this approach, most notably that the ending is fast-paced, punchy and wrapped up with a minimum of fuss, which is a bit of a relief from way too many recent big movies with huge, CG-drenched endings that go on forever (hi, Guardians of the Galaxy Vol. 2). The downside is that the Sakaar sequence is a bit interminable. Jeff Goldblum's Grandmaster is funny, but he's never really a serious threat, and the apparently "serious" character stuff as Hulk undergoes some much-needed character evolution (if you're wondering why and how he can talk rather than just being an irrational force of destruction, that gets explained) could have been wrapped up much more quickly than is the case. As usual Tom Hiddleston steals the show as Loki and Tessa Thompson makes for a compelling new protagonist as the hard-drinking Valkyrie who, refreshingly, doesn't end up as anyone's love interest.

The scenes set on Asgard are briefer, but they do feature a surprisingly excellent subplot focusing on Karl Urban as Skurge. Skurge's character arc is relatively brief and straightforward, but Urban does outstanding work with very little material, confirming his position as the single greatest supporting actor on Planet Earth at this time (get this man back as Judge Dredd, stat!). Of course, it goes without saying that Cate Blanchett relishes her performance as the evil Hela, chewing scenery and unleashing villainous dialogue with absolute conviction.

The film has gotten a reputation as a comedy, even the first outright comedy in the Marvel Cinematic Universe which is a bit of an exaggeration. There's a lot of funny lines and some characters like Korg (a CG rock monster voiced by Waititi himself) are pure comic relief, but there's also quite a lot of death and destruction (the film is called Ragnarok, after all) and a few grim moments. The comedy stuff is fine and there's a few belly laughs here and there, but the trailers definitely give away almost all of the funniest moments which is a bit of a disappointment.

One of the biggest successes in the movie is how Waititi handles effects. He's never handled a CG extravaganza on this scale before and his grasp of visual imagery is striking. Some of the scenes, particularly a flashback to a charge of horse-mounted Valkyrie warriors, are beautifully composed. There's a hell of a lot of moments in the film which would make for great paintings or desktop wallpapers.

Ultimately, Thor: Ragnarok (***½) emerges as the best Thor movie to date but also the weakest Marvel film released this year; it may in fact be the weakest Marvel movie since Age of Ultron, which is a little bit disappointing. It's still fun, funny, well-acted and with some breathtaking visual moments, but it's lacking in the serious dramatic stakes and the film has a messy opening and saggy middle before it pulls things together for a strong, brisk finale that sets up next year's The Avengers: Infinity War. The movie is on general release in the UK and Europe now, and opens in the US in a few days.
Posted by Adam Whitehead at 22:06

I am really, really, really, (really), really happy that we are getting some overt stinkers of Marvel films so that this multi-generational crap-fest can finally snuff itself out. Your review reads as a 2 star review, nothwithstanding your 3.5 star conclusion. Really.