Science fiction author Julian May has passed away at the age of 86. 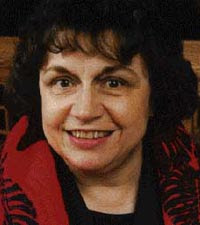 Born in Chicago, Illinois in 1931, May became a fan of science fiction in her teens. She sold her first short story, "Dune Roller" (filmed as The Cremators in 1972 by Harry Essex) to Astounding Science Fiction in 1951; like many female writers of the period, she adopted a pseudonym, J.C. May. This may have proven unnecessary, as her first name meant she was often assumed to be a male writer anyway. She met SF editor and anthologist Ted Dikty in 1951; they married in 1953. Inbetween May chaired the 1952 Worldcon in Chicago, becoming the first woman to chair a World Science Fiction Convention.

May and Dikty had three children and May dropped out of the SF field after publishing her second short story, "Star of Wonder", in 1953. She worked as a prolific editor until the early 1980s, publishing more than 250 books aimed at children which explored topics such as history, sports and music.

She rejoined SF fandom in 1976, attending the Los Angeles Worldcon and writing a gazetteer of Robert E. Howard's Conan the Barbarian world (under the pen name Lee N. Falconer), and began planning a return to writing adult SF. The result was the Saga of Pliocene Exile (or the Saga of the Exiles), a four-volume series in which a group of people travel back in time from a future Earth to seek a simpler way of life in the Pliocene epoch, some five million years in the past. Upon their arrival, they are shocked to discover that the Earth of this era has been invaded by aliens who are interfering with the native species for their own ends. Conflict results. The series consists of the novels The Many-Colored Land (1981), The Golden Torc (1982), The Nonborn King (1983) and The Adversary (1984), as well as a reference work, The Pliocene Companion (1985). 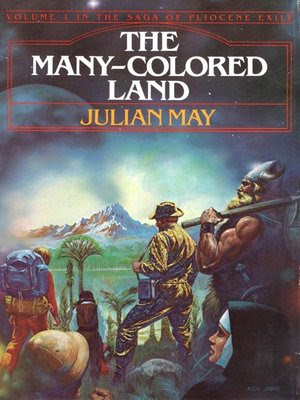 The series sold well and attracted significant critical acclaim, with the first book winning a Locus Award. May returned to the setting with Intervention (1987) and a further trilogy consisting of Jack the Bodiless (1991), Diamond Mask (1994) and Magnificat (1996); the four books together are often called the Galactic Milieu Series. This series acts as both sequel and prequel to the Saga of Pliocene Exile.

May also wrote a shared world fantasy sequence, Trillium, with Marion Zimmer Bradley and Andre Norton. The three authors together wrote the first novel, Black Trillium (1990), with May alone contributing the second and fifth volumes, Blood Trillium (1992) and Sky Trillium (1996).

In 2015 May was inducted into the First Fandom Hall of Fame at the Spokane Worldcon. The same year, she confirmed that her Pliocene Exile/Galactic Milieu novels had been optioned for Hollywood, but no further announcement on that front has been made.

"My client Julian May has died at the age of 86. She was a force of nature, a fighter, and a taker of no bulllshit, working right up to the last minute on a TV adaptation of her best-known work, the "Saga of Pliocene Exile" series. And she introduced me to single malt Scotch at her home on Bainbridge Island, WA years ago. Lifting a glass of Talisker in her honor tonight."

Galactic Milieu trilogy (read after the Pliocene Exile) is to me one of the most memorable pieces of SF and I recommend it often.
She will be missed.

I have the Trillium novels on my reading pile but I wasn't aware of May's age. Somehow I had pictured her to be younger - I don't think I've ever seen a picture of her before this blog post.
So I was quite surprised to learn of her passing away.
Her Pliocene novels sound quite interesting. I wish I had more to read all these promising books out there...

The saga of the exiles is so good. You would be rewarded for reading it.

Sad to hear this news. I loved the Pliocene Saga / Galactic Milieu novels. Need to re-read them!

The last of the Trillium authors has died... When I was a kid I didn't really think much of female fantasy authors; Black Trillium changed my mind.

I also read the Pliocene Exile Saga, which was quite enjoyable.

Adam, thank you for posting this sad news. I don't think I would have heard about it otherwise.

I enjoyed her work, particularly the Pliocene Exile and Milieu series. Over the past decade, after the Boreal Moon Trilogy, I hoped to see another series or novel from her. Alas, it was not to be.

May her work be long remembered, and discovered anew by younger readers.

Ah one of my gateway authors...
RIP.