It's taken almost two decades, but Gollancz - the UK SFF imprint of Orion Books - have finally signed up Steven Erikson. 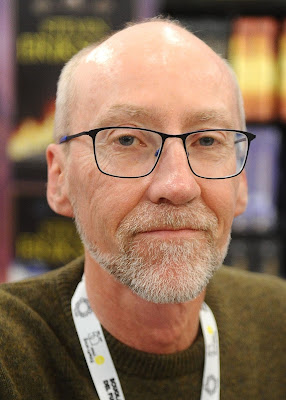 Erikson's new stand-alone SF novel, Rejoice, A Knife to the Heart, will be published in October 2018. The novel is described thusly:


Rejoice, A Knife to the Heart tells the story of the Intervention, which begins when Samantha August, science fiction writer, disappears into a beam of light, apparently from a UFO, while walking along a busy street in Victoria, Canada.  While footage of the incident – captured on smartphones – goes viral, Samantha wakes up in a small room, where she is greeted by the voice of Adam, who explains that they are in orbit and he is AI communicant of the Intervention Delegation, a triumvirate of alien civilisations seeking to ensure the continuing evolution of Earth as a viable biome. Thus begins an astonishing, provocative, beautifully written and startlingly visionary novel of First Contact.

Back in 1998 Erikson sold his debut fantasy novel, Gardens of the Moon (the first in the Malazan Book of the Fallen sequence), to Transworld/Bantam UK. Gollancz attempted to lure Erikson away and the result was a fierce bidding war, which ended with Bantam signing up Erikson for nine additional books for £675,000 (over $1.1 million back then). As far as I can tell, this remains a record for a debut fantasy author.

Email ThisBlogThis!Share to TwitterShare to FacebookShare to Pinterest
Labels: gollancz, news, rejoice a knife to the heart, steven erikson

This bodes poorly for those of us eagerly awaiting the 3rd book in the Kharkanas Trilogy...

Oh, not again. That's not what we are waiting for, Steven ;-)

Aftet Fall of Light he can take as much time as he wants to come out with Walk in Shadow. Hopefully he recaptures some of the old magic with the Karsa trilogy.