Slugfest: Inside the Epic 50-Year Battle between Marvel & DC by Reed Tucker

In 1961 DC Comics was the biggest comic company in the United States. Its superhero comics - Batman, Superman and Wonder Woman - were the most popular in the world and it had absolutely no competition of note. But that same year Atlas Comics was branded Marvel and its editor Stan Lee and artist Jack Kirby released a new comic called The Fantastic Four. Within a decade Marvel had displaced DC as the biggest comics company in the US and snatched away a lot of talent and critical acclaim that had gone to DC. DC fought back, starting formidable Superman and Batman movie franchises and releasing a series of artistic, critically-acclaimed comic books in the 1980s and 1990s from the likes of Alan Moore and Neil Gaiman. But in the early 2000s Marvel finally entered the movie scene in force with X-Men and Spider-Man, and never looked back. 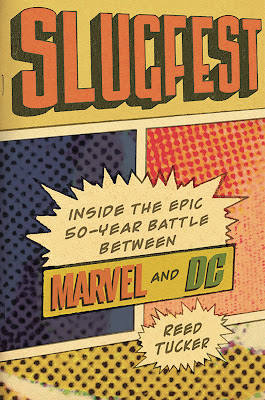 This non-fiction book looks into the 50-year competition between DC and Marvel, the two titans of comic book publishing. Reed Tucker has exhaustively interviewed many key players involved and scoured the archives for interviews with those who are no longer with us. The result is a potential interesting book that examines the corporate battle between the venerable establishment figure and the plucky upstart newbie.

Or at least it's a potentially interesting book that tries to do that. The opening chapters expand on this, detailing how Stan Lee took over a moribund company and injected some 1960s inventiveness, irreverence and character development to win over young fans from the older, more moribund publisher. We're told that Marvel focused more on the characters' internal lives, on the distrust with which they are treated by the government (helping young readers identify with similarly confused and mistrusted characters) and gave their writers and artists much greater freedom to express themselves, throwing away the style guides DC saddled their readers with. Marvel also used real locations, particularly in and around New York, which excited readers more than stories set in completely fictional locales like Gotham and Metropolis.

All of this stuff is great, but Reed never really moves on from this basic assumption: Marvel was the plucky underdog with greater creative energy and freedom, and DC was the staid old man taken by surprise by what the youngster was doing and whose attempts to replicate it by "getting down with the kids" were embarrassing. That applies very well to the 1960s and the early 1970s. However, some of Reed's conclusions and anecdotage are questionable: he challenges the wisdom of DC poaching Jack Kirby from Marvel and putting them on the Jimmy Olsen comic book, but this was both Kirby's own choice (so he wouldn't cost anyone a job on another comic, as the Jimmy Olsen book didn't have a permanent artist at the time) and also allowed him to set up his own, more original books later on by introducing characters like Darkseid.

By the time the 1980s have rolled around, Reed is still expanding on Marvel being the plucky underdog beating the boring old figure of DC, but seems to contradict himself by then talking about DC's artistic achievements with books like Swamp Thing, Watchmen and Sandman, as well as how Marvel had become the biggest-selling comic book company, making DC the underdogs. Aware that this is getting repetitive, he switches to studying the film business and how DC got some great movies made whilst Marvel flirted with moderately successful TV shows but otherwise couldn't get a decent movie on screen until twenty-two years later. This is interesting, with some great stories of bizarre behind-the-scenes battles and the film companies not "getting" comic books at all, but again it lacks depth.

The book is ultimately a bit constrained by its premise, and it's to Tucker's credit that he remains laser-focused on the interrelationship between Marvel and DC. It would have been very easy to get sidetracked in the internal history of the two companies and discuss more creative decisions, but Tucker stays on point throughout. This does mean the book veers towards the more corporate side of things rather than the creative one, which I think will be of less interest to those keen to learn more about the origins of superhero characters or how the books developed. But it has some value: this is an under-told aspect of the comic book story and Tucker keeps the story ticking over nicely.

Slugfest (***½) is a readable and intriguing book about the titanic competition between the two biggest comic book companies in the United States. It's also a bit on the repetitive side, with not as much depth as perhaps might be wished, and a lack of information on the creative choices as opposed to business ones. It's still a good story, well-told and interesting, but one for hardcore comic book fans only. The book is available now in the UK and USA.
Posted by Adam Whitehead at 11:40