GoG has been re-releasing a lot of masterpieces from yesteryear recently. They've managed to secure another major coup by releasing the original Mafia in a new form that's readily compatible with Windows 7, 8 and 10. 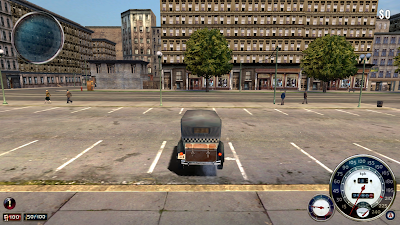 Mafia, subtitled The City of Lost Heaven in the States, was a game from Illusion Softworks released in 2002. The game saw you play a young man named Tommy Angelo as he moves up from being a cab driver to a high-ranking member of the Lost Heaven mafioso. The game features a long and complex storyline in which Tommy is drawn inch-by-inch into the world of the mafia until he realises what sort of people he's aligned with, at which point he starts looking for a way out.

It's a familiar story, told before, but in this game it is told with tremendous skill, subtlety and atmosphere. The game is remarkable both for its high-octane action set-pieces and slightly comically slow car chases (the game is very true to its simulation of 1920s and 1930s vehicles), but also for its slower moments of characterisation, scoping out targets for heists and scenes of just hanging out and talking to people. Released the same year as the excellent (but extraordinarily dark) Grand Theft Auto: Vice City, Mafia got a little lost in the mix but is frankly the far superior game, with less insane mayhem but far more nuance, character and a much better-developed storyline. It's also worth keeping an eye on the cast lists, with actors from both The Sopranos and the then-brand-new The Wire both showing up in surprising numbers.

This new release from GoG has a slight flaw in that the original, licensed music had to be removed from the game. However, there is a fan workaround to restore it available via the GoG Forums.

You can read my original review of Mafia here.
Posted by Adam Whitehead at 22:03