As hopefully everyone is aware, I also blog at Atlas of Ice and Fire, where I'm mapping the history, geography and narrative of A Song of Ice and Fire (and throwing in some stuff for other fantasy series as well). 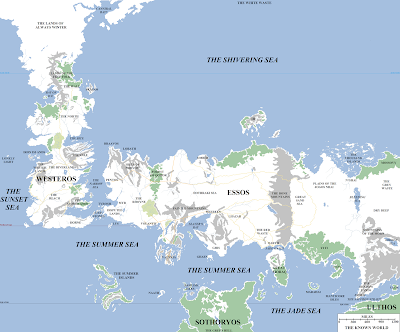 Today I completed the "Geographic Maps" section of the Atlas, 25 maps which cover the known world from the Lonely Light in the Sunset Sea to the island of Ulos in the Saffron Straits beyond even Asshai, a full seven thousand miles to the east. We cover a similar distance from the frozen northern polar region beyond the Lands of Always Winter down to the steaming equatorial jungles of Sothoryos and Ulthos.

This has been quite a project, a full year or so in the making following the completion of the earlier "Historical Maps" section. Next up - probably after a break of a few weeks or a couple of months - will be the "Narrative Maps" covering the events of the novels themselves.

I also blog over on Patreon, where I'm currently producing the "Cities of Fantasy" series. Today's article is on the city of Asshai from A Song of Ice and Fire, but I've also covered cities from other book series and video games. The Cities of Fantasy articles are reprinted on the Wertzone after one month, but you can get early access by signing up to my Patreon feed.

Once again, thanks to all my readers who make this all worthwhile.
Posted by Adam Whitehead at 22:37

It's nice the world is so big. Maybe in the 22nd century when GRRM is done writing ASOIAF he'll come up with other in-universe stories.