The Day Shall Come

The Miami branch of the FBI is working hard to shut down terrorists. The only problem is that they can't find any. Hitting on the idea of manufacturing a threat, the FBI decide to encourage a fringe religious group led by Moses Al Shabazz to purchase automatic rifles and nuclear material so they can arrest them. Agent Kendra Glack takes the leader on the operation, but as she gets to know the Black Santa-worshipping, dinosaur-summoning Shabazz, it becomes clear that he is suffering serious mental delusions and the FBI is in danger of humiliating itself...or far worse. 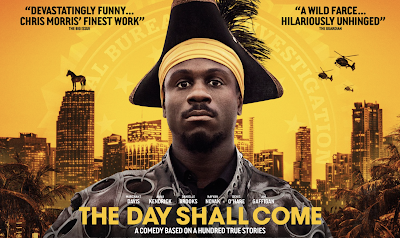 The Day Shall Come is the latest film from British comedian and film-maker Chris Morris. Coming from the same school of laughs that gave us Armando Iannucci (The Thick of It, VEEP, The Death of Stalin) and Steve Coogan (Alan Partridge), Morris writes intelligent, character-based comedy. However, he favours a much darker, more politically-inspired vein of satire than his contemporaries. His last film, Four Lions, was a comedy about British suicide bombers, an idea that sounds like an oxymoron but somehow he managed to pull off.

The Day Shall Come taps into the same vein of politically-aware, midnight black humour. It does feel a little less topical - the War on Terror has receded in the public consciousness as an everyday issue since Four Lions - although this does not make the subject matter any less startling. The revelation that law enforcement agencies around the world have "helped along" terror groups purely to arrest them later is not new, but the idea they may have created such groups purely to fire up their stats feels a lot more controversial. Morris may have made an error in making this a funny story inspired by "hundreds of true stories" rather than actually dramatising one real story, which may have had more impact.

The film focuses on two main characters, Shabazz, played with masterful comic timing and total conviction by Marchánt Davis, and Kendra, played with wide-eyed disbelief by an on-top-form Anna Kendrick. A sort-of game of cat and mouse emerges between the two, but it takes a turn for the strange when Kendra realises that Shabazz has gone nuts and her bosses are trying to set up a mentally ill man as a terrorist just to make themselves look good, and becomes lost in a moral quandary as she tries to help Shabazz without getting herself fired. There's some interesting questions here about moral responsibility and the film never offers pat answers, but it does lowball the seriousness of the issues by leaning hard into the comedy.

Three Lions worked because it started off as a comedy and retained its dark humour through to the end, but it gradually shifted away from the early knockabout jokes to make its dark ending really work. The Day Shall Come never really makes that transition and also doesn't deliver as bleakly cynical an ending (although it's still an uncomfortable one), which means it can't quite match its predecessor's power. Three Lions was powerfully memorable enough to remain memorable, quotable and re-watchable a full decade after release, whilst The Day Shall Come is altogether slighter.

The Day Shall Come (***½) is still worth watching. It is funny, clever, relentless in its assault on the senses in terms of bureaucratic absurdity (most of it down to Denis O'Hare's absurd FBI boss) and has a lot of witty dialogue and amusing sight gags. It just feels like its punches have been pulled compared to its forebear. The film is available now via streaming services and physical media in the UK and USA.
Posted by Adam Whitehead at 19:21