TALES FROM THE LOOP boardgame launches on Kickstarter

Tales from the Loop started as an art book in 2014, became a roleplaying game in 2017, recently launched as a television series and has now made the transition to board games. 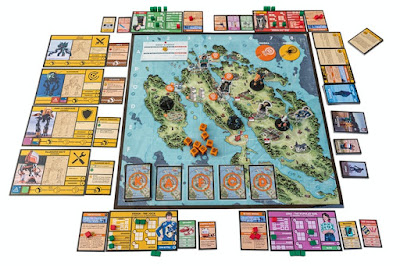 Free League Publishing, who publish the Tales from the Loop roleplaying game, have launched a board game which is based closely on the same premise. The players play a number of Kids who are drawn into investigating strange mysteries emanating from a massive particle accelerator lab called the Loop. These mysteries involved investigations, avoiding "Trouble" and dealing with some of the odd creations of the Loop, including teleportation, robots and even dinosaurs.

Free League have provided a "Print and Play" system which allows people to try the game before deciding to back the project. Their pedigree is pretty good: the Tales from the Loop RPG is excellent and the same design team designed the superb Crusader Kings board game.

The project has already exceeded its funding target, so additional pledges will secure more content and features. The currently-planned delivery date is May 2021, global pandemic crisis notwithstanding.
Posted by Adam Whitehead at 13:40