The Laconian Empire has conquered the Solar system and most of the colony worlds established through the ring space. A resistance movement led by the crewmembers of the Rocinante is hoping to win back the freedom of the individual worlds, but High Consul Winston Duarte has taken James Holden captive. As tensions rise, Duarte makes the bold decision to declare war on the unknown, possibly unknowable aliens that killed the creators of the protomolecule, a war that will have unforeseen consequences. 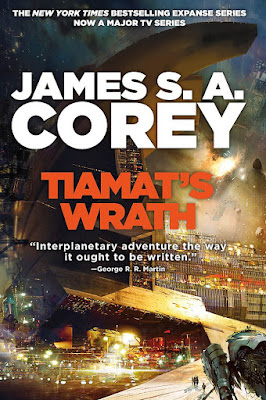 Tiamat's Wrath is the eighth and penultimate novel in The Expanse, moving the series decisively towards its endgame with the conflict against the unknown aliens beginning in force. This is the moment that The Expanse has been building towards for a decade, with the true conflict finally getting underway.

It's a shame, then, that it feels anti-climactic. Part of the problem in this latter part of the series is that it feels like it is trying to do too much in too little space: the conquest of the Solar system by the Laconians happened very rapidly (and mostly off-screen) in the previous book and in this book the resistance movement forms and takes action with almost indecent haste. Persepolis Rising did at least benefit from the tight focus on the Rocinante crew trying to escape Medina Station and using that as a lens through which other events unfolded. Tiamat's Wrath is a much more epic, widescreen book which tries to tell the story across a number of fast-moving fronts, but in almost exactly the same page count. This results in a much faster-paced story where events happen quickly and sometimes without enough setup.

We've been here before, and in fact Tiamat's Wrath forms the second half of a duology that began with Persepolis Rising, and in doing so comes across as a near beat-for-beat retread of the previous duology (Nemesis Games and Babylon's Ashes): in the first book a huge, epic, game-changing event takes place with apparently massive ramifications for the series, and in the second it is wrapped up with almost indecent haste, both times relying on an important female character in the enemy camp deciding to swap sides. The structural similarities between the two duologies can leave the reader with a nagging sense of deja vu. The pieces are different but the game is being played the same way.

There is also the problem that we still know very little about the extradimensional alien threat. We know they're bad news, but their motivations, capabilities and real level of threat remain unclear after eight books out of nine in the series. It does feel a little like the situation with the Others in A Song of Ice and Fire, where we're supposed to be wary of this species but we don't really know what they want so it means their level of threat remains vague. The stakes, rather than being made clear or raised, are instead simply left undefined.

As usual, Daniel Abraham and Ty Franck (who together make up the gestalt entity known as James S.A. Corey) deliver a fast-paced, moderately well-written space opera yarn with some exciting battles, interesting plot twists and some decent characterisation, but also one that feels like it is repeating earlier beats from the series and still leaving a lot of information undisclosed before heading into the final volume of the series. Tiamat's Wrath (***) is solid but occasionally feels like a detailed plot summary of a novel rather than a novel in its own right. The book is available now in the UK and USA.
Posted by Adam Whitehead at 13:15