In 2013, a nuclear war devastated the Earth. The city of Moscow was destroyed by several direct nuclear hits, the few thousand survivors being driven literally underground to seek refuge in the Moscow Metro. Twenty years later several competing factions have arisen, with the Spartan Rangers, the Fourth Reich and the Red Line fighting whilst several independent city-states try to survive in the crossfire. And above their heads, strange creatures have arisen to take control of the surface world. 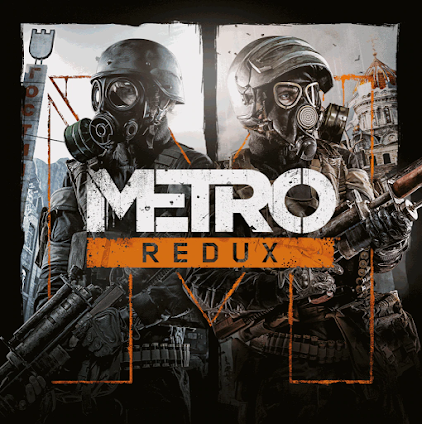 Originally released in 2010 and 2013, the first two instalments in Ukrainian 4A Studios' Metro series of first-person shooters were accomplished games. Metro 2033 and Metro: Last Light told an intriguing story of survival, horror, war, love and loss against a superbly-realised background, provided by Dmitry Glukhovsky's trilogy of source novels (Metro 2033, Metro 2034 and Metro 2035). The developers have form from working on the earlier S.T.A.L.K.E.R. series of games, although the Metro series eschews those games open-world settings for a much more linear and focused experience.

In 2014 both games were reworked and re-released in "Redux" editions. These editions of the games rework graphics, AI, controls and difficulty to provide a more consistent and linear experience across both games. Minor differences in controls, interfaces and enemies are smoothed out to form what is effectively one large game.

Being the older game, Metro 2033 benefits much more from the upgrade. Graphics, physics and lighting are much-improved and things like the games' stealth system is now more reliable and works better. Best of all is the evening out of the first game's infamously punishing difficulty. The original game's "normal" is now "hard" and a newer, normal difficulty level has been imported from Last Light, which makes ammo easier to find. In contrast, Last Light has inherited 2033's more punishing optional difficulty levels to turn it more into a survival game. The disparity between the two titles is gone and you can now play both as either a hardcore survival shooter or a more relaxed and forgiving action title.

Both games have aged well, and their at-the-time impressive focus on stealth has become all the more impressive. The games don't do a great job of telling you about the stealth system though. Basically, enemies, no matter how tough, can be killed with a single thrown knife as long as you take them unawares. You can also sneak up behind them and knock them out or kill them in close proximity without alerting their friends. If one enemy does spot you, instead of magically letting everyone else know your precise location via telepathy, you do have a narrow window of opportunity to disable them before they can alert other guards, allowing you to recover from serious errors. You can also use muffled weapons to take down enemies, extinguish lights, although causing too much mischief from the shadows can lead to the enemy getting suspicious and switching to a higher alert state.

Both games retain impressive action set pieces and the storytelling remains intriguing. The environmental storytelling, reliance on NPC companions and your status as a silent protagonist all make for positive comparisons with the Half-Life series. However, the games suffer a little from their morality system, which they don't tell you about. Basically, the less mayhem you cause, the more guards you knock out rather than kill, the more you go out of your way to avoid killing (even mutants), the higher your morality score. This unlocks secret endings for both games. For Metro 2033, to be honest, this is a bit pointless as the secret ending is not canon (Last Light starts the "negative" ending from the first game, which is off-putting if you're playing both games together), but for Last Light it's more important because the "secret" ending in Last Light is the canon one and sets up the third game in the series, Metro: Exodus. Unfortunately, some of the high-moral outcomes in Last Light are a bit obtuse, requiring you to uncover secret caches and avoid killing even when it appears fully justified to do so.

These vagaries are minor annoyances, and made up for by the package's impressive amount of side-content. All of Last Light's generous DLC is included, including more missions expanding on background events in Last Light (focusing on various side-characters and their own storylines), a solid single-player survival mode set on an open world map with you scavenging for supplies at a huge library, and a specialist (and punishingly hard) sniper map.

Metro: Redux (****) takes two strong, older games and makes them sharper, better and more enjoyable for modern gamers. The morality and stealth systems feel a bit under-explained, but once you get to grips with them, they enhance an atmospheric and accomplished pair of shooters. The package is available now on PC, PlayStation 4 and X-Box One.

Any plans to play/review Metro Exodus? Just started it myself. I love these games!