The Lady of the Lake by Andrzej Sapkowski

The Empire of Nilfgaard is prosecuting its invasion of the North with a three-pronged assault on the remaining free kingdoms. The allied nations make ready to receive them in the largest battle in living memory. Meanwhile, Ciri has learned how to use her powers to travel between worlds, but her ability to control them remains questionable. Geralt, the witcher, and his band of companions reach the fairytale kingdom of Toussaint in their pursuit of Ciri, but face difficult decisions on how to find the missing princess. 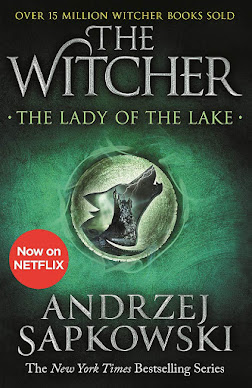 The Witcher books are an odd bunch, with two volumes of tightly-plotted short stories followed by a five-volume novel series which can be best described as meandering. Sapkowski takes in a lot of stories, characters and ideas in the series, but sometimes it feels like a certain focus is lacking. Main characters vanish for books or half a book at at time and it sometimes feels very random what major events will be depicted on-page or left to a side-paragraph in a later volume to be referred to. Sapkowski's witty dialogue and fine grasp of politics, character and action makes these narrative tangents entertaining, but it's hard to ignore the feeling that this could have been a stronger, tighter trilogy with some firmer editing.
However, and it feels like against the odds, Sapkowski ties his flabby narrative together here in the concluding volume with a surprisingly well-constructed ending. Character and story arcs stretching back to the short stories are rounded off well, and the main storylines revolving around Geralt's hunt for Ciri (not since Mario has a hero been so frustrated by the target of his search always being in another castle) and Nilfgaard's invasion are both resolved with surprising emotional power.
The novel follows several narratives in parallel. The main story is Ciri's, as she learns how to use her power to move between worlds (including our own) and finally learn how to stand on her own two feet and make decisions rather than be subject to the whims of others. Behind her is Geralt, whose story suffers a little from him always being a few steps behind Ciri, and not having indulged in any actual witchering for some considerable time. People used to the Witcher novels and video games may be surprised at Geralt's relatively low-key presence in this volume, although his story does climax in an extended battle sequence with he and his friends getting into a fight which they don't all survive. Sapkowski's characterisation of Geralt's band of allies has been good enough that it hurts a bit when not all of them make it (though gamers may be somewhat cheered that, at least in CD Projekt's version of the story, a couple of the characters who apparently bite the dust here do survive to return later on).
Another major story follows the military conflict and it's here that Sapkowski strikes gold, for the complex, multi-front Battle of Brenna is simply one of the finest battle sequences in fantasy this side of the Blackwater, Joe Abercrombie and Paul Kearney. The action is crisp and clear (even when the characters can't tell what the hell is going on), the consequences of the battle well-told and the conflict depicted without any glorification or glamour, just a lot of people dying unremarked in the mud for political causes they don't understand. I was extremely impressed by this extended sequence, where Sapkowski makes excellent use of some of the side-characters and stories he set up in earlier novels.
The semi-tragic finale is perhaps a bit disappointing, leaving the fates of too many characters up in the air, but it feels true to life and true to this world to leave things with a touch of ambiguity (although, again, the video games do present a non-canon, alternative idea of what might happen next). More entertaining is the discussion of the great prophecy about the end of the world, which is savagely stripped of all the traditional fantasy cliches and revealed to be a simple discussion about a scientific, natural process, which I did enjoy for subverting expectations. In fact, Sapkowski's theme in this book is that those expecting cliches and tropes to be employed without irony have definitely come to the wrong series.
Lady of the Lake (****) wraps up the Witcher series in style. It is available now in the UK and USA.
Posted by Adam Whitehead at 17:23

Email ThisBlogThis!Share to TwitterShare to FacebookShare to Pinterest
Labels: andrzej sapkowski, the lady of the lake, the witcher