Margaret Weis and Tracy Hickman have confirmed that a new Dragonlance trilogy is to be published by Random House, starting this year. 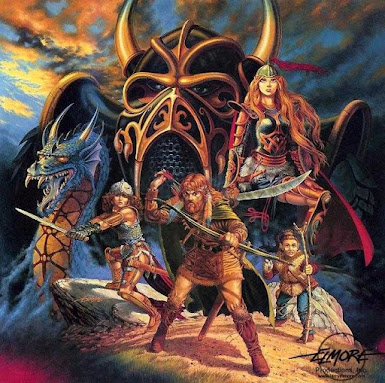 The news comes after a lawsuit between the authors and Dragonlance IP owners Wizards of the Coast (and their parent company Hasbro) in October revealed the existence of the trilogy. The authors, Random House and Wizards had negotiated a deal for three new Dragonlance books and were halfway through writing the three volumes when Wizards put the series on indefinite hold. According to the filings, Wizards were experiencing problems with PR and image after a string of controversies and had decided that pursuing another legacy project was something they didn't want to deal with. However, this meant them breaking their contract with Weis and Hickman.

With Weis and Hickman suing for $10 million and Wizards in hot water with various other controversies going on, the two parties reached an out-of-court agreement in December and the lawsuit was dismissed without prejudice (meaning that Weis and Hickman could renew the lawsuit later on if there are further issues; usually a sign that the other party has surrendered without argument).

Dragonlance is a campaign setting for the Dungeons and Dragons roleplaying game, which has seen a huge resurgence in popularity in recent years. Many of the basic Dragonlance concepts were created by Tracy Hickman and his wife Laura in 1983, then fleshed out by a team of writers and editors who turned the basic idea into a series of adventure modules for the D&D game. Hickman teamed with editor Margaret Weis to write the original Dragonlance Chronicles trilogy novels, followed up by numerous more books in the same world. The Dragonlance Chronicles (1984-85) and Dragonlance Legends (1986) trilogies sold over four million copies before the end of the decade, making them one of the biggest-selling fantasy series of the decade. To date, the Dragonlance novels penned by Weis and Hickman have sold over 30 million copies worldwide, making them the second-biggest-selling authors of D&D fiction (only slightly behind R.A. Salvatore and his Legend of Drizzt series) and among the top fifty best-selling SFF authors of all time. Weis and Hickman have also worked widely in other settings and with original material, including the Death Gate Cycle, Rose of the Prophet Trilogy and Darksword Saga.

The setting has previously seen some controversy. In 2008 urban fantasy author Jim Butcher was approached by WotC to spearhead a full reboot of the entire Dragonlance saga, including rewriting the original trilogy as a five-book series. Butcher would only proceed with Weis and Hickman's blessing and, when that was not forthcoming, the project was abandoned.

Dragons of Deceit (working title) by Margaret Weis and Tracy Hickman, will be published this year. Although ordinarily a new Dragonlance book or trilogy might not attract a huge amount of attention (the last few books were not well-reviewed), the combination of the lawsuit and a dearth of recent official D&D fiction (this will be only the fourth D&D-branded novel to be published in the last five years) should mean that this does rather well.

Sorry, I have not been paying attention. What controversies has WotC been mired in? Or is it just better to google it? Last I heard they were making a mockery of real world issues with their Orc Lives Matter pandering.