The USS Discovery has been propelled forwards to the 32nd Century as part of a move to hide important technical data that threatens their timeline. Upon arrival they discover that the galaxy is in ruins, the result of a disaster known as "the Burn" which made dilithium inert and thus destroying every ship with an active warp core at the time. The Federation has fallen from more than 350 member civilisations to a bare handful, and is facing a threat from a competing alliance known as the Emerald Chain, which believes in money, slavery and advancement through struggle, concepts the Federation left behind a millennia earlier. As the crew of the Discovery try to settle into this bleak new world, they realise their Spore Drive gives them the ability to do what no-one else has done before: to discover the origin of the Burn and help restore the Federation to its former glory. 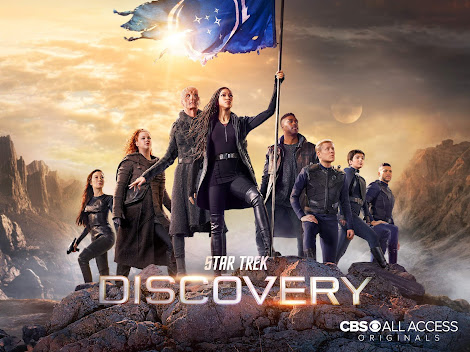 You're too generous. This series is trash and I won't watch it. If Star Trek ever again delivers logical plots and characters with believable motivations I will watch it. If not, not. We're supposed to be living in an era of prestige TV, but the standard for established properties is perversely so much lower than new entries. To try and compare like to like, even The Witcher, which is deeply flawed, is a thousand times more consistent, and The Expanse and the first season of Altered Carbon are miles ahead in quality.

Sooooo I just watch the finale episode. I agree completely about the turbolifts...... Major letdown from the awesomeness of the earlier Nivar episode.