The Federation-Klingon War continues to rage, with the Federation gaining some victories thanks to the USS Discovery's spore-based quantum teleportation drive. Unfortunately, the last jump has carried the Discovery way beyond where anyone has gone before...into another universe.

Star Trek: Discovery had a rocky start, with a prequel two-part story before we even got to meet most of the show's actual recurring cast and the ship itself. The show's tone has been all over the place, whilst the writing has frequently let down the excellent actors that the show has assembled. The second part of the season - which consists of six episodes compared to the first chunk's nine - solves some of these problems. This batch of episodes is much faster-paced, more consistent in quality and delivers some very solid payoff to the mysteries set up at the start of the season, if several of those revelations were predictable months in advance.

Again, Discovery benefits from its very solid cast. Jason Isaacs, James Frain, Sonequa Martin-Green, Anthony Rapp, Mary Wiseman and Shazad Latif all continue to deliver stand-out performances, bringing real depth to their characters and performances even when the scripts occasionally falter. Wiseman and Latif in particular benefit from the back run of episodes, with Tilly channelling her youth and enthusiasm in some very unexpected directions and becoming a far more impressive character as a result. Latif's Ash Tyler gets put through the emotional winger and although there are some holes in the way his story developers, the actor never gives less than 100%.

The show continues to be one of the best-looking on television, with sets to die for and some very accomplished action scenes. The CGI and space scenes continue to disappoint, however. Discovery has gone for a very stylised and colourful look (Nebulas! Everywhere!) to its space scenes which are arty but also not very good at getting across the staging and geography of its space battles. The clean lines of the previous series where you could tell what the hell was going on are sadly missed at this point. Starship designs also continue to disappoint: the Klingon ships, which seem to be a hodge-podge of ideas thrown together with little regard for logic or design philosophy, are particularly poor. 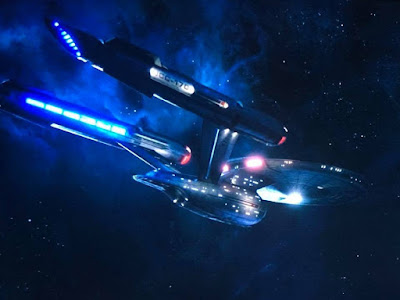 In terms of story, a large chunk of this back run of episodes takes place in the Mirror Universe, Star Trek's go-to place when it wants to do morally unambiguous action stories (because everyone in the Mirror Universe is All Evil, All the Time). Discovery's use of the Mirror Universe is effective - avoiding creeping tone of camp that crept in during Deep Space Nine's frequent excursions there - if a bit overdrawn at four episodes, even if these did allow the reappearance of Michelle Yeoh as the evil Philippa Georgiou, whom Yeoh plays with scenery-destroying relish. Still, it gives the series a much-needed dramatic focus.

The show's final stretch feels badly compromised by earlier decisions. Putting both L'Rell and Voq on Discovery and killing off every other Klingon character of note means we have no real stake in the Klingon side of the conflict, especially once L'Rell and Voq both realised that the Federation is absolutely totes awesome after spending five minutes hanging out with them (the "assimilation" threat of the Federation from earlier in the season feels appropriate at this moment). The decision to retire the teleportation device, reinstate Burnham and end the war with a literal deus ex machina (at least from the Klingon POV) also makes it feel like Discovery is giving us easy, pat answers to large, complex problems. The final shot of the season is also very cool, along with the choice of theme music, but it also feels like the show should perhaps have tried standing on its own two feet for a while before playing this card.

Ultimately, the second half of Star Trek: Discovery's first season (***½) is watchable and enjoyable, with a very strong cast (easily the strongest assembled since Deep Space Nine a full quarter of a century ago) and some really interesting ideas being explored. It's a also still a bit muddled in its storytelling, confused in its canonical status and veers inconsistently from setting up complex, morally murky situations to delivering pat, easy answers. But it remains the finest opening season of a Star Trek show since DS9 (if not the original series) and provides a solid foundation for the second season to build on. Star Trek: Discovery can be watched on CBS All Access in the USA, SPACE in Canada and Netflix in most of the rest of the world.
Posted by Adam Whitehead at 13:37

Actually, it's JASON Isaacs, not Jeremy. :)