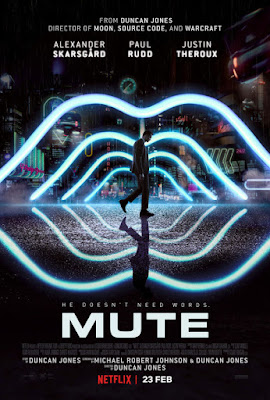 Set in a near-future Berlin, the film sees a mute bartender named Leo (Alexander Skarsgard) searching for his girlfriend Naadirah (Seyneb Saleh), who has gone missing. He embarks on a journey through the city's shady underworld in search of two American surgeons (Justin Theroux, Paul Rudd) whose names keep coming up in relation to the mystery.


Intriguingly, the film is set in the same world as Jones' first movie, the cult hit Moon, and Sam Rockwell will return as Sam Bell from that movie, although not (it's expected) in a major role.

If successful, Jones has a script for a third movie in the "Mooniverse" ready to go.

The film will be released on Netflix on 23 February.
Posted by Adam Whitehead at 19:00

Any news for a Warcraft sequel?????

It's in the PACIFIC RIM bracket that it actually made quite a decent amount of money, enough to justify a sequel, but also that a lot of the money came from overseas, so the production company will likely only be able to proceed if they get money from those sources (like China and South Korea). There's still talk of it happening but certainly no sign of it moving forwards right now.

Cool, thanks for the info.