Hasbro and Paramount have released a curious statement that suggests that a full reboot/rethink of the Transformers movie universe could be incoming. 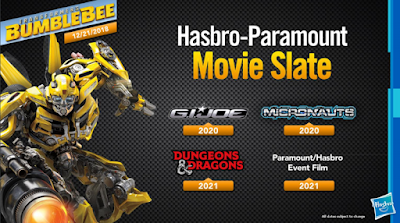 The current iteration of the Transformers movie universe began in 2007 with the release of Michael Bay's Transformers. It then continued with Revenge of the Fallen (2009), Dark is the Moon (2011), Age of Extinction (2014) and The Last Knight (2017), all of them excruciating. The next film in the series is Travis Knight's Transformers: Bumblebee (2018), which is the first movie in the series not to be directed by Michael Bay. It's also the first film in the series to pick up some positive vibes, mainly due to the revelation that the movie will be set (at least partially) in the 1980s and will feature Bumblebee in his original Volkswagen Beetle form from the original toys, comics and cartoon series.

Paramount had previously slated another full Transformers movie for 2019 and had also assembled a writer's room to discuss options for other movies, including a movie set on Cybertron at the start of the Autobot-Decepticon War and another one set in Ancient Rome, where the Transformers would have presumably transformed into chariots, triremes and giant war elephants.

As of today's announcement it sounds like this idea has been cancelled. Many of the writers in the collective assembled by Paramount have decamped to other projects - Akiva Goldsman to Star Trek: Discovery, Lindsey Beer to the Kingkiller Chronicle movie and TV series, and Robert Kirkman to an exclusive development deal with Amazon - and the 2019 Transformers VI movie no longer appears on Paramount's development slate, suggesting it has also been canned.

This may be down to the disappointing box office of The Last Knight. It made $600 million worldwide, only slightly more than half of the previous two movies' $1.1 billion. With a production budget of $220 million and marketing to match, The Last Knight certainly still turned a profit, but that 50% audience drop seriously surprised Paramount and clearly has them pondering the future of the franchise.

Hasbro's plans now include a rebooted G.I. Joe movie for 2020, which will ignore the previous two films and will be a return to the franchise's roots. They will also be releasing a Micronauts movie in 2020 and the long-gestating Dungeons and Dragons movie (more on that soon) will launch in 2021. More intriguingly a "Hasbro/Paramount Event Movie" will be released in 2021 as well. This may be a Transformers reboot, but it may also be the long-mooted G.I. Joe vs. Transformers crossover movie. The two properties have crossed over many times previously in comic books and there was a hint that the two 1980s cartoon series took place in the same universe (with a character showing up in Transformers who was almost certainly Cobra Commander in disguise), but this would be the first on-screen, large-scaled team-up of the two brands.

Unlike many franchises, many Transformers fans have been praying for a reboot of the movie franchise almost since it started, with many of Michael Bay's decisions (particularly his awful direction, incompetent action scenes, poor scripts and the genuinely terrible production design of the Transformers themselves) roundly criticised and rejected. Here's hoping if there is a reboot, the next creative team will do a better job.
Posted by Adam Whitehead at 01:45

It's too early for a reboot. With Bumblebee, that's SIX Transformers movies since 2007. That's like one every 2 years. If Hasbro want a reboot, then they need to stop releasing the movies for awhile and let the franchise rest.