Starz's adaptation of American Gods has gotten a new showrunner in the form of Jesse Alexander. Alexander worked alongside outgoing producer-showrunner Bryan Fuller on both Hannibal and Star Trek: Discovery and Starz seem to be hoping he can keep some of Fuller's magic on the show. More encouragingly, Neil Gaiman is taking a more hands-on role on Season 2 of the show, apparently with the plan (backed by Starz) of getting the show to hew closer to the novel. 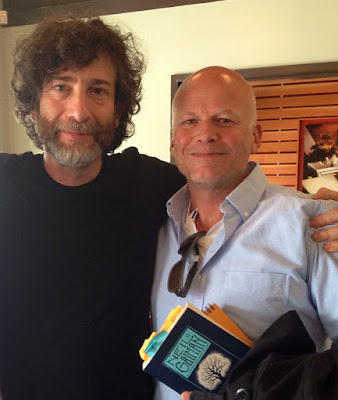 The Hollywood Reporter also has the skinny on why Fuller left the show between seasons. Season 1 went a mind-boggling $30 million over-budget. American Gods was already one of the most expensive shows on television, with a budget well north of $7 million per episode, so this overrun must have caused massive consternation at Starz. On top of this overrun, Fuller was also demanding a substantial budget increase for Season 2 above the extra $2 million per episode (taking the show to $9 million per episode, potentially making American Gods the third-most-expensive show on-air, behind only Game of Thrones and The Crown) already agreed with Starz. Apparently there was a logjam exacerbated by the possibility that Season 2 might not air until two years or more after Season 1.

Fuller has moved on and is now in talks to helm a TV adaptation of Anne Rice's Vampire Chronicles. Gaiman and Alexander's remit now seems to be getting American Gods done within the confines of its already-generous budget and on a much more frequent timescale than had previously been planned. All going well, Starz hope to air the second season of American Gods in January or February 2019, providing there are no further setbacks.
Posted by Adam Whitehead at 23:12

I suppose this is generally favourable news . Season 2 will happen .

I like the series well enough but I totally understand Starz's position. Fuller went $30 million and still dared to ask for more money? I get the feeling he was just begging to be fired.

Wouldn't it be Gaiman's and ALEXANDER'S remit?

My instinct is always to side with the creative vision, rather than with the corporate suits, who are generally idiots. And I do like Fuller.

I mean, going $3m per episode over budget on a show that already cost $7m per episode - that's a big deal. That's a 43% budgest overrun on what was already a very expensive show. And to be honest... does it need to be the most expensive show on TV? I can't see why. I kind of get the feeling Fuller's never met a writer's block or staging complication that he doesn't try to solve by throwing a blisteringly expensive arty slow-motion CG sequence at.

And I'm a bit worried for him now. Hannibal bought him some critical credibility, but it's not like he's ever had the box-office draw to make him untouchable.
Because now his record is:
- Voyager: meh
- Dead Like Me: fired ("left") after a couple of episodes (eventually ran for 28 episodes)
- Wonderfalls: only four episodes aired, then the show was pulled and the other 9 went straight to video
- The Assistants: commissioned for a pilot but dumped when they saw the script
- The Amazing Screw On Head: pilot shown, dumped after poor audience response
- Heroes: "left" after one season
- Pushing Daisies: critically acclaimed, but dropped after only 22 episodes
- Heroes again: "left to work on other projects" after six months
- Sellevision: dumped when they saw the script
- No Kill: dumped when they saw the script
- Mockingbird Lane: made it to pilot, then dumped
- High Moon: made it to pilot, then dumped, and pilot never even shown to the public
- Pushing Daisies: liked, but cancelled after 22 episodes
- Hannibal: critically acclaimed, but only made it to 39 episodes thanks to an extremely fortuitous financial arrangement
- STD: sacked before finishing shooting. Given a $7m/ep budget, which ended up at $8.5m AFTER other people came in and tried to rein back the expense
- American Gods: made ten episodes, then sacked. Given a $7m/ep budget, ended up spending $10m. Did OK in terms of viewers, apparently.

You'd think that after going hugely over budget and getting fired from two of the most expensive TV shows in history, in succession, having never actually produced any major popular success, and without even a great batting average in terms of critical acclaim, his attractiveness to new studies has got to be declining rapidly, I'd have thought. Now he's got two shows again, which was a huge problem for him last time - Amazing Stories and Vampire Chronicles, and both look to have opportunities for massive overspends and divisive narrative choices (I mean, the guy massively overspent and made divisive narrative choices while faithfully adapting American Gods, for goodness' sake! I didn't think that was possible!). You'd think that if things go wrong for him again (and I'm betting he ditches at least one of those shows to concentrate on the other), he's got to be nearing the end of the rope that the studios will grant him...


If I were him, I'd really try to pay attention to the notes from above on his next project. And... sorry if this sounds like heresy, but that might actually improve the shows. Sometimes the faceless, risk-averse corporate suits actually are right. His best work on all his shows, so far as I can see, has been when he's stuck more tightly to traditional storytelling and been more grounded in the realities of the characters and their situations. Rather than three-minute abstract CG art displays...

I'd agree with that. A good showrunner picks his battles, knows when to stand his ground and when to give way and finds a good working relationship with the money men. Budgetary restraints I think also help improve storytelling, as you have to work around the lack of money with the things you do have: character and dialogue. BABYLON 5 cost $90 million for the entire series: all 110 episodes, the pilot and the first four TV movies. The per-episode budget in Season 1 was $800K per episode. That's insane! But they made it work because the show was rooted in dialogue and character, and they very carefully harboured their CG budget for some knock-out shots. British dramas made do on far less, of course.

What did The Wire and Deadwood cost per episode?
Especially The Wire must have been cheap to make and it's often hailed as the best series ever.

And oh, look at that, there we go, Fuller has "stepped down" from Amazing Stories due to "creative differences".

That was sooner than I thought... presumably he want to focus all his stepping-down-over-creative-differences skills on his upcoming departure from Vampire Chronicles...