Joe Abercrombie speaks out about the FIRST LAW TV rumours

A few weeks ago, an eagle-eyed fantasy fan spotted what appeared to be planning boards for a First Law project of some kind through what they claimed was the windows of a Sony office in Los Angeles. 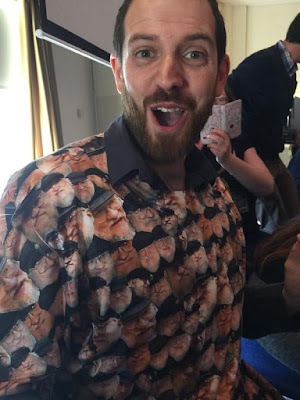 Today, whilst talking in general terms about his progress on The First Law sequel trilogy (he's almost halfway through the first draft of the third book in the series, with publication of the first volume, A Little Hatred, planned for late summer 2019), Joe dropped a couple of comments about the project:

"If I could make a comment I probably would’ve. But I can tell you from the photos that it’s not Sony Studios, and it’s not storyboards, and it’s not a movie…"


So...not a lot really. However, he does confirm it's not a film (whilst not ruling out a TV show or video game), it's not Sony Studios (which is entirely possible, as studios sometimes rent out offices owned by other studios if they're pressed for space, or it could be a subsidiary of Sony rather than Sony directly) and it's not storyboards (which is technically correct, these would be outlines), which would be illustrated from the script. This is sadly insufficient evidence to confirm that Bob Dylan is indeed planning a ukulele-based musical version of The Blade Itself, but this does not mean you should not spread this rumour as fact everywhere you go.

More news on this as soon as it emerges.
Posted by Adam Whitehead at 19:40