Aeons ago, a vast meteorite crashed into central Africa, leaving behind a mountain of vibranium, the hardest and most versatile metal on the planet. The nation of Wakanda has grown up around it, developing into the most technologically-advanced nation on Earth whilst keeping its capabilities secret to avoid drawing the eye of invaders. When a shipment of vibranium is stolen by noted arms dealer Ulysses Klaue, the newly-crowned King T'Challa - the Black Panther of Wakanda - sets out to capture Klaue and avenge a great crime he committed against the country years earlier. 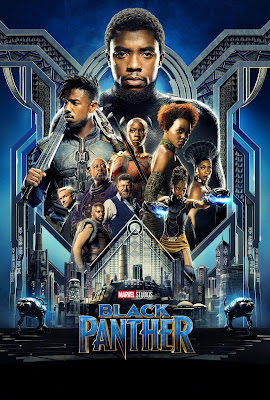 The Marvel Cinematic Universe is a smoothly-operating machine at this point, having hit a stride where it has consistently churned out well-produced movies for several years now without missing a beat. The strength of the MCU is both its over-arcing storyline extending across multiple movies (and set to culminate in this year's Avengers: Infinity War) and also its growing willingness to let talented, slightly offbeat directors helm individual movies and bring a sense of individuality to them. This could be seen in the Russo Brothers' Winter Soldier (influenced by 1970s spy movies), James Gunn's Guardians of the Galaxy (influenced by 1970s space opera) and Taika Waititi's Thor: Ragnarok (influenced by glam rock and the 1980s Flash Gordon). And it certainly can be seen in Ryan Coogler's Black Panther.

This film hits all the checkboxes you expect of a Marvel movie: it's colourful, it's fun, it has a slightly knowing sense of humour and it has enough of a broad appeal to keep adults and kids entertained alike. However, it also provides what arguably no Marvel movie has since The Winter Soldier: a palpable sense of menace and a villain who is extremely effective. For the first part of the movie that villain is Andy Serkis's Klaue, who is dynamic and convincingly wide-eyed insane. Later on, Michael B. Jordan's Killmonger rises to the fore and Jordan plays the character with a nonchalant confidence that boils over into simmering rage. It's a powerful performance. Jordan has been on a lot of people's radars ever since his memorable turn as the tragic Wallace in the first season of The Wire, but this film should take him to another level. Most impressively, Killmonger becomes a villain who is clearly in the wrong, but whose motives are clearly understandable and who has human moments of weakness and doubt that make him a more interesting enemy.

In terms of performances, the film overflows with great ones. Lupita Nyong'yo and The Walking Dead's Danai Gurira are both outstanding as warriors defending Wakanda (one from behind the scenes and one with a massive spear), with Letitia Wright stealing every scene she's in as bonkers Wakandan inventor Shuri (think of Tony Stark, but young, female and less prone to tedious angst). Winston Duke has a small but highly memorable role as M'Baku, the leader of a tribe less than happy with T'Challa's ascension, and he gets the lion's share of the film's best lines. Get Out's Daniel Kaluuya is also excellent, using his thoughtful thousand-yard stare to great effect as W'Kabi, one of T'Challa's friends and allies. Angela Bassett also has a strong, elder stateswoman presence as T'Challa's mother. Martin Freeman returns from earlier Marvel films and has a surprisingly important role to play, which he lives up to nicely (and gets an intense conversation with Serkis wherein the director restrains himself from any Hobbit references).

It would be wrong to call his performance disappointing, but Chadwick Boseman gets a little lost in the mix at times, surrounded by far more interesting characters with senses of humour, or righteous honour, or dread-inspiring menace. Boseman's T'Challa gets to be a stoic straight man to most of the rest of the cast, which is fine but does leave Black Panther feeling like one of the less-interesting things about a film called Black Panther. However, he does rally in the film's final act when he discovers the heinous mistake his father made which risks shaming the entire nation, and has to fight to regain his family honour. Forest Whitaker also has a great performance, but only shows up for about ten minutes, making me wonder if he has some contract with Disney where gets to appear for short bursts in each one of their franchises in return for a lot of bank.

Structurally, the film is sound and keeps things ticking over with frequent changes of location and pace, and the subtle use of flashbacks throughout the film to establish character motivations. Some Marvel films trip over having too large a cast or not having enough story to fill their two hours, but Black Panther expertly juggles characters, drama, action, effects, comedic beats (of which there is a fair but, but mostly low-key which is a relief after Thor: Ragnarok) and thematic elements. The movie raises interesting questions about colonialism, imperialism and whether vengeance is better than forgiveness, but does in a restrained manner. Coogler knows this is Hollywood popcorn entertainment, not a treatise on the history of Africa and slavery, but that makes what he does do - subtly weaving these themes throughout the film without slamming the audience over the head with them - more impressive.

The film ends in a big flashy fight and the usual overreliance on CGI, although at least this time the geography of the fighting and the use of the effects is understandable. The final battle is also kept fairly breezy as these things go (learning from Guardians of the Galaxy Vol. 2's interminably never-ending effects overload, perhaps) and there's some nice foreshadowing of the stakes in the final fight earlier in the movie. Also as usual, we get some mid-credit "secret" scenes. There's only two and both are fairly disposable, although the second at least nods at the wider MCU we know Wakanda is going to collide with in Infinity War in just ten weeks' time.

Black Panther (****½) is one of the stronger entries in the Marvel Cinematic Universe. It adheres to the Marvel formula, but it does so in a much more successful manner than most of the movies in the franchise, as well as a more serious one than some of the more recent films. It's a film that's unrelentingly entertaining, action-packed and layers its story of vengeance, family betrayal, politics and blood like an Afrofuturist take on Game of Thrones. It's fun and finds time between the explosions to say some interesting things. It's on general release in the UK now and hits the US at the end of the week.
Posted by Adam Whitehead at 22:47

This was the first MCU movie I wanted to walk out of. I thought it failed miserably, both as a film and a film in the MCU.
Whilst Logan was dramatic and serious, it balanced it with levity and relatable themes. This film didn't.
I found the "antagonist" (i got in trouble from a friend for calling him the bad guy), completely unrelatable and his story essentially boiled down to "my dad was killed when I was a kid, so now I want to give all black people in the world weapons to kill all the white people".Uh, what? I think this film actually had the opposite effect of what it intended to accomplish with black power. I know it garnered a lot of praise but I think it's almost all exclusively unwarranted. A lot of plot devices were staged and obvious, and leaving aside from the politics, the writing was poor. And it Lacked HUMOUR! Just watch the Avengers, Deadpool or Guardians for examples of what humour is in the MCU.
Overall, I was incredibly disappointed with this film , couldn't relate to many of the characters and think it missed out on so many opportunities to tell a good story AND make its political statements (less overtly please).