The American West, 19th Century. A series of strange events is unfolding. Organ-stealing doctors, masked bandits empowered by Mexican mysticism, the walking dead and even Death himself are on the prowl. A number of people find themselves crossing paths with the Weird West, and not all will survive the experience. 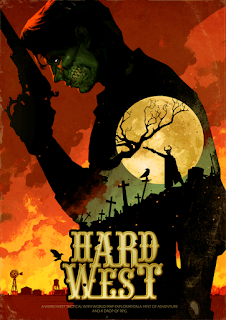 Hard West is a turn-based tactics video game from CreativeForge Games, in which you guide your posse of between 1 and 4 characters through a supernatural version of the American West. It would feel lazy to simply say it's "XCOM meets Deadlands", which is a problem since it pretty much exactly XCOM meets Deadlands. If you're a fan of those games and settings, this should already have sold itself to you. If not, a further explanation follows.

Hard West is divided into two game modes. There is an overland map of a territory or region, divided into several areas of interest. You can direct your posse to visit these areas. You can engage in trade in towns and at markets. Other areas will present you with Oregon Trail-like strategic decisions which may yield rewards (equipment, guns, special ability cards, money or supplies) or disadvantages (such as injuries or having items stolen). Some areas will result in combat, at which point the game switches to a colourful 3D map. You guide your characters across this map in a manner identical to XCOM: you can carry out two actions, such as moving twice, moving and shooting or reloading a weapon and using a special ability. Your characters can take cover behind obstacles and are either in half-cover or full cover depending on the type of scenery available, which reduces damage.

In a highly interesting move, the game doesn't use random number generators to determine the enemy's chance to hit. Instead your characters have a second numerical value (as well as health), called Luck. Shots that would hit you can instead be deflected if you have a high enough luck, whilst special abilities can be triggered if you have a high enough luck score. Taking a hit and surviving replenishes your luck, and certain consumables can also restore it.

The game's combat mode is outstanding. The maps are varied and interesting, each one hand-crafted (there is no random map generations as in XCOM2) to provide the maximum amount of satisfying terrain for a fierce firefight. Guns are solid and chunky, with some nice variety in rifles for long-range combat, shotguns for close-up work and pistols for everything between. There is also scope for using grenades (in the game's parlance, nail bombs), although they play a considerably less important role than in XCOM. There is a bit of a learning curve as you adjust to how the came calculates chances to hit: this takes into account enemy character's Luck score, meaning you'll sometimes have only a 30% chance of hitting someone right in front of which which feels weird, but then they have the same disability with regards to hitting you. The game gives more options for flanking an enemy and hitting them from other directions than XCOM, and there is a distinct lack of destructible scenery which makes the game feel less dynamic than XCOM (where you can gradually destroy the entire map over the course of a battle) but also tenser.

The battle mode does have a couple of drawbacks. The stealth mode is undercooked and unnecessary (running in all guns blazing is always more time-efficient), and the lack of an Overwatch mechanic can be frustrating. This is exemplified by the fact that enemies have an area of control around them: step into this area (such as trying to get up close for a pointblank shot) and they will shoot you automatically. Annoyingly, your characters don't have the same ability and can be outflanked and attacked pointblank at will, which feels unfair. Still, given most combat takes place at range, this is rarely a major problem. 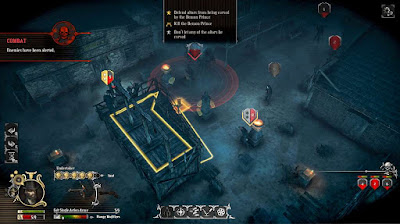 Before each battle you have the ability to customise your posse. You can decide what guns they can take into battle and what consumables they can stock up on (doctor's kits and healing elixirs are a must, along with wearable items which can give you more movement points or a bonus to Luck or Health). Most intriguing is the game's skill system, which takes the form of a deck of playing cards. You can give these cards to your posse to unlock special abilities, such as the ability to heal naturally out of sunlight, kill an enemy hiding in the shadows or to fire a snapshot at every enemy in view. If you combine cards in poker hands (flushes, two-of-a-kind etc), you unlock secondary, passive abilities. This is a clever, fun way of giving your characters crucial edges in combat.

The out-of-combat map stuff is also fun, but extremely thin compared to XCOMs Geoscape mode. The Oregon Trail/Banner Saga-style moral choices are interesting, but you're not usually given enough information or context to know when to make a gamble and when to be conservative and back off, which can frustrating. What does make this mode work is its brevity: Hard West is divided into eight scenarios (and a ninth in the expansion, Scars of Freedom, which is included with most modern editions of the game), each of which takes around 2 hours max to complete. Each one of the overworld map campaigns has a different focus and mechanics. One has you shepherding a group of civilians to safety, another has you racing a clock with dwindling supplies and another has a new mechanic based around genetic engineering and replacing body parts. Switching gears every couple of hours through the game helps keep things fresh and ticking over.

Storyline wise, the game's scenarios together build up an over-arcing narrative about a man cursed by Death as a young man and the various characters he bumps into along the way. Eventually these matters culminate in a grand showdown campaign where you have to assemble the various heroes and villains into a big posse to invade Purgatory itself. It's all a bit silly and fun, although the going can be overly grim at times. The game could do with some lightening up at times. The storyline is also interesting, but not tremendously coherent, as the ability to play the campaigns in (almost) any order you want means that long, long periods of time can elapse between important narrative beats. The expansion campaign, Scars of Freedom, is completely unrelated to that in the main game and also has no setup or explanation. It's not too hard to catch up on what's going on but it's a bit weird to say the least.

The core of Hard West is the turn-based combat and this is highly satisfying and addictive. The storyline and campaign mode are a little thin, but do a good job of supporting the turn-based action.

Hard West (****) is available on Steam now and should scratch that XCOM itch for those waiting for Phoenix Point and whatever the future of the XCOM franchise itself holds. In the meantime, CreativeForge Games are working on a new XCOM-alike called Phantom Doctrine which will heavily focus on a stealth approach, with a bigger budget and a more intricate campaign mode.
Posted by Adam Whitehead at 17:38