Twenty-five years ago this May, the time travel drama TV series Quantum Leap ended. Starring Scott Bakula and Dean Stockwell, the show ran for five seasons and followed the adventures of Dr. Sam Beckett, the inventor of the "Quantum Leap Accelerator". Beckett is stuck leaping from person to person through time, putting right what previously went wrong, solving crimes, helping broken romances etc. It was a very popular, feel-good show. 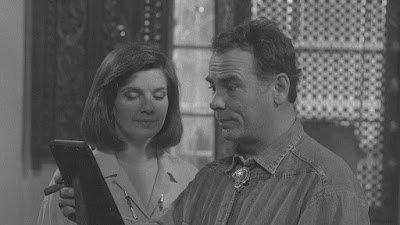 Or at least it was until it's finale. Mirror Image was a strange episode where Sam leaped into a small American town on the very day of his birth. He met a barkeeper played by an actor who'd been in the very first episode, with the suggestion that both may be a manifestation of "god, fate, time or whatever", and this force had been responsible for Sam's leaps through time. At the end of the episode Sam discovers that he has always had the power to return home, he just chose not to because there were still people to help. In his final leap, Sam sets his friend Al's life to rights, making sure the woman who'd left him because she believed he'd died in Vietnam (instead of being made a POW) knew that Al was safe and coming home. A final title card revealed that, "Dr. Sam Beckett never returned home."

It was a contentious and slightly odd ending, especially because the cancellation of Quantum Leap had come about fairly late in the day, so the finale was a recutting of what had originally been planned to be merely a season cliffhanger (if a far more dramatic one than any before it). Creator Donald P. Bellisario has been tight-lipped about how the story would have continued in a sixth season, but rumours have abounded of a different ending that was filmed and then cut.

A full quarter of a century years later, it's been revealed that there was indeed an alternate ending filmed. Quantum Leap fan Allison Pregler bought some negative from publicity shots for the series via eBay and discovered some odd images that she didn't recognise from any episode. It was only after looking at them closely she realised they came from the much-rumoured alternate cut.

In this scene, we discover that Sam did indeed change history so that Beth waited for Al, they got married and lived very happily together for thirty years. We also discover that Al had still joined Project Quantum Leap, still met Sam and still been his Observer through all his adventures (making fans everywhere breath a sigh of relief). We discover that Sam has vanished without a trace after his last adventure went as normal. The scene ends with Beth convincing Al to go into the Accelerator himself and jump in search of Sam. This, presumably, would have been the premise for the sixth season, with Al physically joining Sam in his adventures through time.

It's great to find these questions that fans have been asking for 25 years have been answered, and will no doubt fuel speculation that the show could either be rebooted or even continued directly (as both Bakula and Stockwell are still with us and acting frequently) in the future.
Posted by Adam Whitehead at 23:42

I prefer the alternate ending where Sam leaps into the body of a starship captain myself. ;)

".....Beth convincing Sam to go into the Accelerator himself"

i presume you mean Al.

Interesting stuff, have the stars never admitted to this ending being filmed, wonder why not?

I like that - would have made for a cool next season.

Not sure if you are into podcasts but if you are then you should check out the very excellent Quantum Leap podcast called Beckett to the Future. Two women discuss every episode of the show in chronological order of the dates that Sam leaps into. They go into great detail of each episode and the time period that it takes place in and they are also really funny. Its an amazing podcast, especially if you are a fan of the show. Its pretty easy to find with a basic podcast app and they are also on Facebook.