Fifteen years ago, Arthur Everest saw his father killed in front of him by the Terror, a monstrous supervillain. Although the Terror was defeated and apparently killed by the alien Superian ("they even found his teeth!"), Arthur is convinced he faked his death and is lying low. When evidence emerges suggesting that he might be right, Arthur reluctantly teams up up with a new, enigmatic superhero on the scene - the Tick - and the murderous arch-vigilante Overkill to expose and defeat the threat. 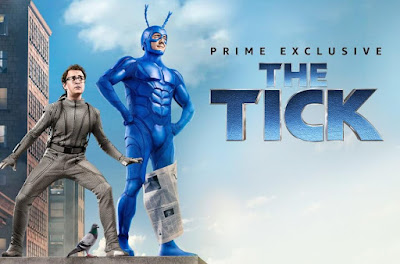 There is a man who steps forth when destiny calls, like a great bugle of need. His name is Ben Edlund. Back in the late 1980s he created and wrote the comic book known as The Tick, a firm riposte to the po-faced, self-serious and darkgrim direction comics were taking. In the mid-1990s, when superhero movies and animated series were starting to take off, he created the Tick animated series, once again calling forth the legions of absurdity and satire in a family-friendly format. In 2001 Edlund returned once more with the first Tick live-action TV series, starring noted gravelly-voiced heroman Patrick Warburton, but the time was not yet quite ripe. The show as great, but the live-action audience were not so oversaturated with superheroes that the Tick's job could be done fully.

But now the wheel has turned and once more the Great Blue One has been summoned forth. Our TV schedules are packed with dubious Netflix Marvel shows about increasingly obscure heroes and you can barely leave the cinema about a besuited vigilante before being dragged back inside to watch the next one. The Tick has never been so needed.

Amazon TV has resurrected The Tick as a 12-part live-action series which takes a different tack to its forebears, focusing on Arthur (Griffin Newman) as our gateway character to this insane world, with a story initially focusing on his mental health problems. It's an approach that Tick fans were dubious about in the beginning, but we should have had faith. As well as telling tales of his blue insectoid protagonist, Ben Edlund has spent years in the trenches of genre television, writing many of the finest episodes of Firefly and Angel (he wrote Smile Time for the former and Jaynestown for the latter), as well as penning two dozen episodes of Supernatural and working on both Powers and Gotham. This has given him formidable experience of writing for television. Melding this experience with his signature hero has resulted in possibly the most joyously entertaining season of superhero television since the 1960s version of Batman.

The show stumbles a little in its two opening episodes as Edlund seems to be musing on what kind of show he's making. But by the third episode he has fully committed: The Tick melds the absurd, surreal humour of the animated series with the slightly darker tone of the original comics whilst also taking occasional potshots at the Netflix Marvel and other superhero shows which go in for over-earnest drama and fight scenes. It's almost a live-action cartoon and is gloriously entertaining.

Peter Serafinowicz plays the titular hero (Patrick Warburton chose not to return to act in the role, but instead acts as a producer). The former voice of Darth Maul, Serafinowicz has gained new fame as an impressionist, vocal comedian (responsible for the popular "Sassy Trump" YouTube video series) and collaborator with Edgar Wright and Simon Pegg on projects liked Spaced and Shaun of the Dead, as well as picking up supporting roles in movies like Guardians of the Galaxy. When it was announced that Warburton would not be returning as the title character, many fans were dubious until Serafinowicz was announced as his replacement. Serafinowicz owns every scene he's in, delivering the Tick's off-kilter observations and constant look of amiably bemused befuddlement with commitment. This may be the role he was born to play and he delivers on it in full.

Griffin Newman is a little bit more on edge and harder to like as Arthur, which is a problem as he's our eyes in this bizarre world. But eventually he relaxes, starts actually investigating the problem (rather than assuming he's having a breakdown) and becomes more interesting protagonist. It helps that the cast rapidly expands in size. Valorie Curry proves able support as Arthur's sister, Dot, and Scott Speiser is magnificently cast as Overkill, a hilarious pastiche of the Punisher and Batman who might be the show's best character ("We'll work...near each other." "Do you mean together?" "I WORK ALONE!"). Alan Tudyk also gives a great vocal performance as the voice of the AI controlling Dangerboat, and John Pilcher has a small but memorable role as Dr. Karamazov, a bodily-challenged mad scientist. Townsend Coleman also gives an excellent performance as the voice of Midnight, a talking dog turned author (complete with his own book signing that will have writers everywhere - dogs or otherwise - nodding in sympathetic recognition).

On the side of evil we have Yara Martinez as Elektra-riffing Miss Lint and the mighty mighty Jackie Earle Haley as the Terror. Haley, no stranger to superhero antics after playing Rorschach in the Watchmen movie, gives the performance of his life, riffing on both the Terror's evil and amiable humour with aplomb. Not too bad on the drums either.

The show builds over the course of its 12-episode run (divided into two half-seasons by Amazon, to give us a great mid-season cliffhanger involving, of all things, an Alexa), becoming more absurdist and surreal by the moment. It's hard to know where the show peaks, with Dangerboat's growing unrequited love for Arthur or the arrival of a fedora-wearing robot detective or Brendan Hines' chisel-jawed performance as Superian, a Superman analogue who is far less empathetic, or a chase sequence involving a pram. But The Tick roots its story in Arthur's predicament and his growing confidence and willingness to embrace being a superhero, and follows that throughline - "Destiny calls!" - to a natural conclusion.

The season ends by wrapping up its barmy storyline - in the lengthy exposition sequence Arthur declares the Terror's plan to be the stupidest thing he's ever heard and he isn't wrong - but leaving some plot hooks dangling for the second season. The most obvious is the question of the Tick's origin (although given that the comic book and animated series have both avoided this, don't hold your breath), but there are also hints that the Terror's plan may have had a larger motive behind it, that Arthur's stepfather has a hidden past and that the government superhero monitoring agency, AEGIS, has now taken an interest in our heroes.

The first season of The Tick (****½) is a magnificently absurdist piece of slapstick satire, with many of the best lines on television you will hear this year. It is available to watch on Amazon TV now. A second season will air in 2019.
Posted by Adam Whitehead at 15:07