DUNGEONS AND DRAGONS movie switches studios, gets a 2021 release date

The long-running saga of the Dungeons and Dragons movie has taken another twist. 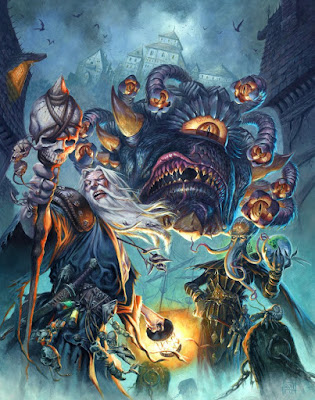 After a lengthy and curious legal battle between Universal and Warner Brothers, the latter emerged with the rights to develop a D&D movie back in 2016. The project was fast-tracked, with Rob Letterman (Gulliver's Travels, Goosebumps, Detective Pikachu) hired to direct and Ansel Elgort (Divergent, The Fault in Our Stars, Baby Driver) in talks to star. The movie was going to be set in the Forgotten Realms world, specifically the city of Waterdeep and the Yawning Portal Inn, including its secret entrance to the vast subterranean dungeon of Undermountain.

However, things have changed rapidly in the last few months. Warner Brothers' option expired and Hasbro gained full control of the D&D movie rights (for the first time; the previous film rights were sold before Hasbro's acquisition of D&D owners Wizards of the Coast, to their displeasure). They have now teamed up with Paramount to develop the movie project instead. Paramount and Hasbro have developed a close working relationship together over the course of five successful Transformers movies and two successful G.I. Joe pictures.

It is unclear if Letterman and Elgort are still in the frame for the movie and how much of the previous concept will be retained, but it does now at least have a release date: 23 July 2021.
Posted by Adam Whitehead at 02:04

Email ThisBlogThis!Share to TwitterShare to FacebookShare to Pinterest
Labels: dungeons and dragons, news, paramount, wizards of the coast

What they really need to do is either adapt one of their more popular books (Dragonlance and the Drizzt stories are both pretty popular and have a good bit to work with), or buy the rights to a strong fantasy script and swap in some D&D elements to place the setting. The D&D movies so far have been terrible, with the amount of thought going in to them seemingly beginning and ending with "put Dungeons and Dragons in the title." Of course GI Joe and the Transformers movies are also horrible, so I guess I shouldn't expect much.