Mute is the story of an Amish-raised (but not devout) man who can't speak and who can't use technology who has to find his girlfriend when she vanishes into the crazy brashness of mid-21st Century Berlin, which requires him to make a journey through the seedy underbelly of a city riven by crime. 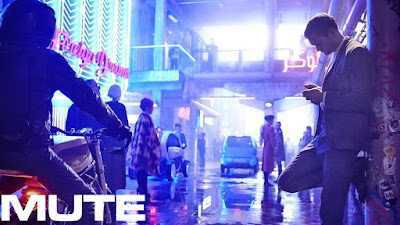 Mute is also the story of two ex-US soldiers, both adversely affected by their tours of duty in the Afghanistan (in a war now in its fifth decade with no sign of ending), who team up in the Berlin underworld, one for the money and one in the hope of making a better life for himself and his daughter, but can't help falling prey to their worst instincts.

There are two potentially interesting stories here around which you could build effective movies. Director Duncan Jones appears to, at one point or another, decided to mash them together into one film which is at tremendous mistake. Mute is a movie that is somewhat less than the some of its parts.

It's impossible to dismiss the feeling that Duncan Jones's career hasn't gone quite the way it should. He started out with the excellent Moon (which occurs in the same universe as Mute, although this is in no way relevant to the plot), before moving onto the entertaining Source Code. His third movie was the insaneo-budgeted WarCraft which was, although by no means a complete disaster, not the break-out, effects-driven hit he needed either. He's now gone back to his (relatively) low-budget roots with Mute, a film which he's been planning to make for over a decade, at one point conceiving it as a Lock, Stock and Two Smoking Barrels-style Mockney comedy-thriller before deciding (somewhat randomly) to turn it into a Blade Runner homage and introducing a love story, a mute lead and a missing persons, noir thriller plot.

To say these two plots are a tonal mismatch is an understatement. Alexander Skarsgard plays our non-speaking protagonist Leo with a lot of intensity, putting to use the years of brooding he finely honed on True Blood. He makes for an interesting lead you can't help but root for, even if you're not quite sure how he puts together the clues needed to follow his missing girlfriend's trail (or pay his rent or take part in modern society at all) since he refuses to use the internet or own a mobile phone. However, every time his dogged pursuit through Berlin's neon-lit underbelly threatens to become compelling, we cut away to Cactus Bill (Paul Rudd) and Duck Teddington (Justin Theroux), the American vets whose experiences in Afghanistan have left one a borderline psycho with a Bowie knife obsession and the other one, apparently, with an unhealthy interest in very young girls (which kind of kills any enjoyment you could otherwise get from Theroux's otherwise game performance). Bill and Ted's adventures could have perhaps been more watchable - with less paedophilic overtones and more dark comedy - in a Tarantino kind of way, but the writing doesn't quite snap into life enough to make them interesting protagonists. And even when their storyline does become more intriguing, the camera suddenly cuts away to Leo, who is now doing something completely incongruous from where we left him (like hanging out with a depraved, sex robot-owning Dominic Monaghan or trading punches with Noel Clarke: Mute at least provides gainful employment for actors who were moderately big about ten years ago and have faded from view since then).

It's a bizarre film filled with bizarre characters that doesn't really hang together very well. There's some nice visual effects moments and some entertaining musical homages (Jones's father David gets a few musical shout-outs, and Nirvana's "Heart-Shaped Box" gets a music box cover version because why not), as well a grin-inducing moment when a bunch of what are blatantly cyborgs from classic 1993 cyberpunk game Syndicate (which had a level set in Berlin) show up. Jones's direction is also very effective on a scene-by-scene basis.

Mute (**½) is not without merit and has some outstanding performances, particularly by Paul Rudd who badly needed a role to show him being something other than an amiably goofy nice guy and steals every scene he's in as an unhinged psycho. But overall this is a film that feels like the script needed another two or three passes and a tonal rewrite before it was ready for the screen. Every time the movie does something that makes you really like it, it delivers another moment that makes you groan with embarrassment. But as a failure, it's still an interesting one. Mute is on global release via Netflix right now.
Posted by Adam Whitehead at 21:32