Sony are continuing to develop their long-gestating Robotech film project, based on the 1980s American animated TV series (based, in turn, on three Japanese anime series edited together into a single narrative). They now have a director and a writer for the film. 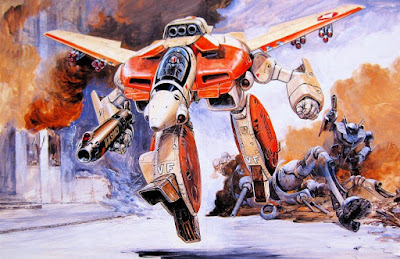 James Wan has withdrawn as director, to be replaced by hotter-than-sun Andy Muschietti, the director of the two-part movie version of Stephen King's IT, the first half of which was released last year to critical acclaim. Muschietti is currently working on IT Part II, which will be released on 6 September 2019. Muschietti will begin work on Robotech in earnest once IT Part II wraps post-production, which probably won't be until mid-2019 at the earliest.

Jason Fuchs has also been attached to the Robotech project as writer. He's thrown out the scripts developed over several previous years and is now working on a fresh take. Fuchs is also in demand following his credit as a co-writer on last year's Wonder Woman. However, his other scripts (Ice Age 3 and Pan) have been less well-received.

Assuming this project moves forward - which seems more likely now a firmer directorial deal seems in place (Wan's deal apparently foundered over DC's inability to confirm a timescale for his Aquaman project, although that is now shooting) - it'll probably be 2021 or 2022 before we see the film on the screen. There also remains a major issue in that Harmony Gold (the creators of Robotech) are in dispute with Studio Nue and Big West (the creators of the Macross anime, which is the primary source for the Robotech story and animation) over international distribution rights for the Macross series, sequels and prequels in the United States and Europe. As a result of this dispute, Studio Nue have refused to licence the original Macross mecha designs to Harmony Gold or (as far as is known) Sony. This means that if the Robotech film moves forward, it will not be able to use any of the mecha, starship or vehicle designs from the original Robotech series, This will not go down well with fans eager to see the Veritech fighters from their childhood in action on-screen.

Still, interesting to see how this project develops as it goes forward. The basic Robotech/Macross premise is incredibly strong: an alien starship crash lands on Earth just before a nascent World War III is about to go nuclear. The world's superpowers band together in the face of this greater threat and reverse-engineer the starship and its technology. A decade later, the alien owners of the ship (or, more accurately, their genetically-engineered slave-soldiers) show up to reclaim it and all hell breaks loose.
Posted by Adam Whitehead at 18:23

Okay, so for the cast (partial)

Without the SDF and Veritech mechs it is pointless.

Well... At this point they'd be better to do a sequel to Shadow Chronicle.
And that would leave them the time and probable money to resolve the Macross IP conflict.

If Sony dont solve the problem to use the originals Veritech sdf1 and so...

I'm assuming that Minmei will be played by Scarlett Johannson?

Naw Minmei is gonna be played by Constance Wu. Girl got pipes and got the baby face.

I fear this will be in production hell for a long time. I fear it'll be another extreme adaptation movie there are just some anime I think that unless you stay to the premise in the theme the characters and The tech don't bother making it. If they decide to use the veritechs Tom cat designs rather obsolete hopefully they'll upgrade to something more dynamic like the lightnings. This is just one series you just can't deviate with extreme change adaptations.

Money talks. im sure sony will sit down with all partys and make them see that collaboration is more profitable then something that isnt the 80's tv show and they both lose and sony fyi is a
Japanese comp. So maybe the the property rights gets sorted out.I wont see any robotech movie unless it has rock hunter etc I grew on