BATTLETECH to hit PC in April

The turn-based strategy game BattleTech has a release date: April 2018, which is next month (effectively). When in April? Dunno, but I'm assuming 30 April and if it launches earlier than that, I'll be very happy. 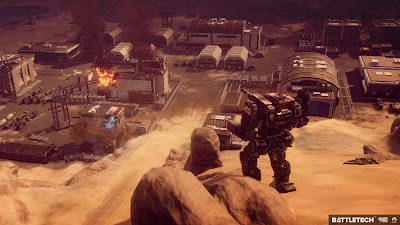 BattleTech is based on the BattleTech/MechWarrior universe created back in the 1980s as a tabletop wargame and roleplaying game. In the 1990s it became a bestselling video game series, particularly in the MechWarrior and MechCommander series. Piranha Games have kept the flame burning with MechWarrior Online and the upcoming first-person action game MechWarrior 5: Mercenaries, but BattleTech has excited a lot of people for returning to the turn-based roots of the series and for being created by Jordan Weisman, the original co-creator of the series who has already created three excellent games based on his other well-known franchise, Shadowrun.

The game will incorporate a campaign mode where you choose what mission to do next and outfit and upgrade your mechs before switching to a 3D battlemap where you fight for dominance and victory, making full use of terrain, jet packs and massive missile volleys of explodorama.

BattleTech will be stomping onto PC some time in April as the first salvo in the Year of BattleTech.
Posted by Adam Whitehead at 20:05