Sailing back into HOSTILE WATERS

In 2001 Rage Software released a strategy game called Hostile Waters. Due to a copyright issue, it was given the slightly less-wieldy title of Hostile Waters: Antaeus Rising in the United States. The game was released to a rapturous reception, with universal critical acclaim and high review scores. However, these did not translate into high sales. The game sunk pretty quickly and Rage Studios had to close its doors a couple of years later. 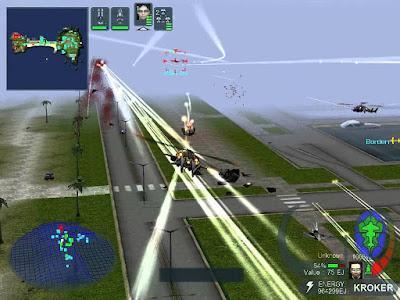 The appeal of Hostile Waters has never really gone away though. Retrospectives (like this one) surface every couple of years and the game has gained a new lease of life through re-releases on GoG and Steam. And it's both easy to see why the game is so beloved and why it also didn't resonate with a mass audience.

Hostile Waters is a strategy game inspired by the 1988 video game Carrier Command. It has an all-new story written by comic writer and novelist Warren Ellis (Transmetropolitan, The Authority, Crooked Little Vein). Set in the year 2032, it depicts a world utterly at peace. In an alternate-timeline 2012 humanity created the "Creation Engine", a nanotech reassembler which can take garbage, pollutants and other materials and recreate them as anything: food, clothing, electronics. The Creation Engine resulted in the collapse of the old order of capitalism and warmongering, as the abrupt arrival of a post-scarcity society made such things obsolete. Some of the old order did not like this and tried to ban Creation Engines, even going to war to obliterate them and all knowledge of how to build them. They were defeated in a brief, brutal and bloody conflict. 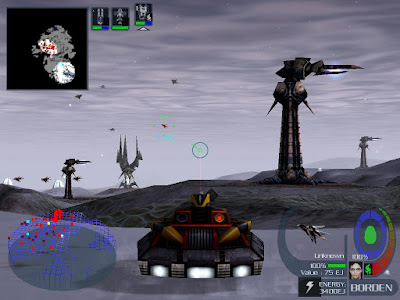 Hostile Waters opens with the peaceful, semi-utopian society that resulted from the Creation Engine coming under attack: missiles fired from a remote island chicane in the South Pacific are striking the major cities. An "adaptive cruiser" - a warship fitted with Creation Engines so it can build a complement of strike craft on the fly - named Antaeus is sent to the chicane to investigate. Sure enough, it turns out that the "old guard" of dictators, generals and now-redundant business tycoons are behind the attacks, using Creation Engines and genetic engineering to unleash a new threat, a biological WMD that they can use to blackmail the world. The early part of the game sees you - playing the commander of the Antaeus - investigating the threat, taking on Cabal military forces (who start off using traditional vehicles like Apache helicopters and Abrams battle tanks) and becoming aware of the more devastating weapons the Cabal is working on. Later on in the game the Cabal launches their bioweapon, which promptly turns on them and becomes a much greater threat than anyone was expecting.

What is interesting about Hostile Waters is the control scheme. It's real-time tactics game which anchors the in-game camera to one of your military units. There is no gods eye view of the battlefield like in, say, StarCraft or Command and Conquer. There is a strategic map (accessed via the F1 key) but this pauses the game. You can issue orders to your units in this mode, but you have to come out of the map to see them unfold. This makes for an engrossing variety of gameplay: at one moment your units are engaged in a furious real-time battle and then you pause the action for a leisurely appreciation of the battlefield and what orders you can give. You can also take direct control of a unit and fly/drive it around the battlefield like an action game before allowing the AI to take over again. This allows Hostile Waters to be both incredibly intense and also extremely relaxed at the same time.


Adding to the complexity here is the fact that you can't create infinite numbers of units. Instead you have a set number of "AI chips". Like in the novel and TV show Altered Carbon, people have their personalities captured on a chip at the moment of death (in this game the chip is called a Soulcatcher). You can assign one chip to one vehicle. You can't use copies as this causes the AIs to have massive existential crises mid-battle. Without a chip, the vehicle cannot operate autonomously and needs to be directly controlled by yourself. Even more brilliantly, the AI chips all have different specialities: Ransom likes to be in an attack helicopter, Patton in a tank with a big gun, Borden in a hovercraft and Korolev in a utility vehicle, either scavenging or repairing other units. Put them in other vehicles or give them weapons they don't like and they do not perform as well. The AI chips also have an amusing amount of banter they engage in during the game. Although their catchphrases do get a little repetitive, this eerily reinforces the fact these aren't people but electronic copies of their personalities at the moment of death.

The game's presentation is exceptional. As a seventeen-year-old game the graphics are obviously dated, but still eminently playable. The story, written brilliantly by Ellis with dialogue and narration far beyond the quality of video games even today, is narrated with gravitas by the mighty Tom Baker (Doctor Who, Little Britain). Church and Walker, your two advisors, are played by Glynis Barber and Paul Darrow from Blake's 7, and both do a fantastic job (especially Darrow). The voice actors for your units are also very good, packing a lot of personality into their audio barks and occasional commentary on what's going on. The minimalist musical score is also very enjoyable.

The game is also remarkable for how dark it gets, moving from a military wargame to, later on, The Thing-style body horror. There are hard moral questions asked in almost every mission and the game's morality gets pretty murky later on when you are asked to commit genocide.

The reasons for the game's failure are also unfortunately clear. As a PC-only game self-published by a small British company, it didn't have the marketing clout to get much advertising out, particularly in the United States. More damningly, the game did not ship with multiplayer. The pause-action-pause dynamic did not seemingly allow for any kind of multiplayer at all, and in the age of StarCraft, Total Annihilation and (a few months later) WarCraft III, this did not fly. Frustratingly, the creators did complete a multiplayer patch but the company collapsed on the very day it was finished, so they never issued it. 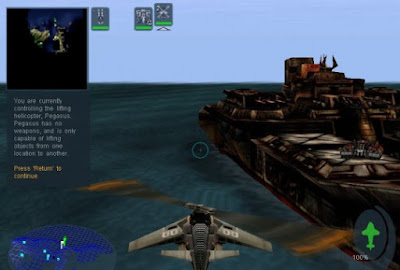 The game's cross-genre appeal also did not allow it to be categorised easily. It's a frantic action game and a slow-paced strategy game at the same time. It's a very cerebral, thoughtful science fiction story and also a pulpy, schlock military horror story simultaneously. For those who love their genres blended together, tonal variation done well and things to be unpredictable, Hostile Waters is one of the best games ever made. For those who like their games to fit into snug, well-delineated boxes with no flexibility, the game does not work as well.

Hostile Waters was released at the same time as several other strategy games which rejected the Command and Conquer/StarCraft paradigm in favour of doing something more interesting and original, such as Homeworld, Battlezone and Ground Control (and, although a lot less successfully, Star Wars: Force Commander). Ultimately, the middling sales of all these games and the outright failure of Hostile Waters seems to have led to the conclusion that all people wanted in the strategy space was more C&C clones, even today, which is a shame.

Hostile Waters is a fantastic game, if you can get into its headspace and how it does things. It's a remarkable, never-likely-to-be-repeated mash-up of transhumanist, post-Singularity hard SF, biological horror, military fiction and frantic action. It's influences are Vernor Vinge, Greg Bear, Command and Conquer and The Thing but it generates an atmosphere all of its own. It's a game screaming out for a modern remake, or even a HD remaster. It remains strongly recommended.


Thank you for reading The Wertzone. To help me provide better content, please consider contributing to my Patreon page and other funding methods, which will also get you exclusive content weeks before it goes live on my blogs. SF&F Questions and The Cities of Fantasy series are debuting on my Patreon feed and you can read them there one month before being published on the Wertzone.
Posted by Adam Whitehead at 13:26