Today marks the 30th anniversary of the airing of the very first episode of Red Dwarf, the world's longest-running science fiction comedy show. Set 3 million years in the future, Red Dwarf is the story of the last known human being alive, Dave Lister, a slovenly bum, and his friends and allies (and the officious, arrogant and borderline insane Arnold Rimmer, Lister's nemesis) as they explore deep space and occasionally try to get home. 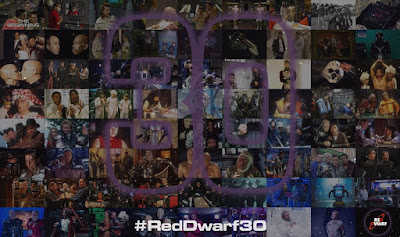 Red Dwarf was created by writers Rob Grant and Doug Naylor in the mid-1980s. Grant and Naylor had been writing together for years, working as writers on satirical puppet show Spitting Image and on radio shows such as Son of Cliche. On Son of Cliche they created a character named "Dave Hollins, Space Cadet", an Earthman who gets stuck millions of years in the future with only a senile computer for company. They developed and expanded the concept, re-titling it Red Dwarf, and trying to sell it to the BBC or Channel 4.

They initially had a cool reception: the BBC was trying to shut down Doctor Who, feeling the show had run its course (they succeeded, if only temporarily, in 1989), and was fiercely resisting making another SF show. There wasn't much interest from other quarters. The show was only finally greenlit after influential producer Paul Jackson - who had produced the massive hit shows The Two Ronnies, Three of a Kind and The Young Ones - took on the project and championed it.

Despite this success, the show was assigned a tiny budget that badly affected Grant and Naylor's casting choices. They'd originally wanted Alfred Molina to play Lister and Alan Rickman Rimmer, but with less money to hand they settled on "punk poet" Craig Charles and one of their voiceover funnymen from Spitting Image, Chris Barrie. Dancer Danny John-Jules and stand-up comedian Norman Lovett completed the cast, place a humanoid descended from Lister's pet cat and the ship's super-advanced AI Holly, respectively. Given their original casting choices had all been white, Naylor and Grant had ended up with a cast that was 50% black, which came in for some bizarre criticism in the British press at the time. The show also had no regular female characters, although this was the point: later episodes established that the absence of any women on board would contribute to the crew's growing list of neuroses and bizarre tics. The show wouldn't gain a recurring female character until Season 3, when Hattie Hayridge took over from Norman Lovett as Holly (who could change his/her appearance at will), and then the addition of Chloe Annett as Kochanski in Seasons 7 and 8.

Red Dwarf debuted on 15 February 1988 to largely indifferent ratings, but a surprisingly strong critical response. In fact, the first episode of Red Dwarf - the ironically titled The End - attracted the highest Audience Appreciation Index response since the Queen's Coronation in 1952! The rest of the first season was patchy, with the terrible budget and awful sets letting the show down even when the gags were pretty funny. 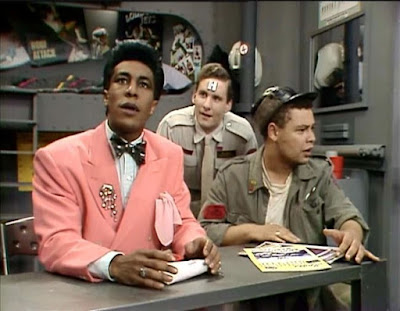 The cast of Red Dwarf in the first episode, which aired thirty years ago today: Danny John-Jules as Cat, Chris Barrie as Rimmer and Craig Charles as Lister.

Season 2 followed later the same year, and saw a slight budget increase that allowed for location filming and some pretty good model work. Grant and Naylor also adjusted their writing style. Having been influenced by Alien and Silent Running, they liked the idea of nailing the isolation of the characters. They built episodes around the idea of loneliness and also around Rimmer's tragic backstory (which they were careful to ensure made the character more understandable, not magically more likeable). The second season was vastly superior to the first and ensured that a third season was commissioned. Naylor and Grant took more direct control as producers and were able to assign the budget more carefully, making it look like the series had been given a much bigger budget increase between seasons than was really the case. Season 3 had a faster pace, more location shooting, more elaborate visual effects, all-new sets and the addition of a new character, service mechanoid Kryten, played with scene-stealing relish by Robert Llewellyn.

It was at this point that Red Dwarf became a breakout, smash-hit success. Seasons 3-6 (airing from 1990 to 1993) saw a very high, consistent run of quality, with some remarkable effects and character work. The show benefited from Naylor's decision to include more actual science in the show, with it riffing on quantum science, nanotechnology, artificial intelligence, virtual reality, parallel universes, alternate timelines and other cutting-edge ideas. Ratings were huge, breaking records for a show airing on BBC-2, and the critical acclaim was immense. Grant and Naylor co-wrote two bestselling novels based on the series, Infinity Welcomes Careful Drivers and Better Than Life, and discussions over a feature film began. The show's future appeared bright.

Then the show was rocked by two major problems. First off, Craig Charles was arrested on serious criminal charges. Although these charges were later dropped and he was fully exonerated, they took over three years to fully resolve. During this time Rob Grant also quit the show. He felt that the potential of the premise had been exhausted and he wanted to try other projects, including writing novels. Doug Naylor was left to take the reigns himself. With Charles's problems resolved, Seasons 7 and 8 were finally shot and aired in 1997 and 1999. Season 8 won the show's highest ratings of all time, smashing BBC-2's highest ratings recorded up to that time. However, Seasons 7 and 8 only got a lacklustre critical reception, with many viewers feeling that the show had run out of ideas and was badly missing Grant's input, who was much better at character whilst Naylor was more the ideas man.

Then the show disappeared for eleven years. 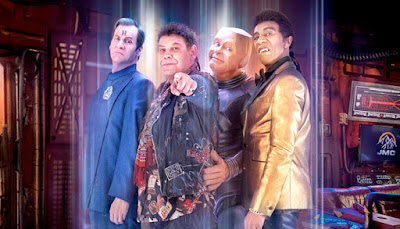 Chris Barrie as Rimmer, Craig Charles as Lister, Robert Llewellyn as Kryten and Danny John-Jules as Cat in Red Dwarf XII, which aired in 2017.

Doug Naylor had made a decision that Red Dwarf belonged on the big screen and dedicated the next decade of his life trying to get the show into cinemas. Scripts were written and rewritten, investors were lined up (only to pull out). Several times the film got within weeks of entering production only to fall apart at the last minute. Frustrated and annoyed, Naylor finally got the show back on the air in 2009, writing and producing a three-part mini-series for the BBC-owned cable channel Dave called Back to Earth (since retconned as Season 9). It was not well-received, but did get enormous ratings. These paved the way for a return of the series in full, resulting in Seasons 10 (2012), 11 (2016) and 12 (2017), all of which had a positive critical reception, as well as setting records for the Dave cable channel. A thirteenth season is now in the planning stages.

Red Dwarf's appeal has largely been down to the everyman factor, putting blue-collar workers in space who don't know anything about quantum entanglement or slipstream drives, they're just there to keep things ticking over. The show also mixes quite advanced gags about science with very basic gags about bodily secretions, as well punching a hole through the po-faced nature of science fiction. Kryten's quest to become human and learning about human concepts is treated dubiously by the rest of the crew (resulting in the memorable line, "Knock off the Star Trek crap, it's too early in the morning") and then given a very amusing resolution, when he actually becomes human for an episode and is so horrified by having to manage a penis ("Is that the best design someone could come up? The 'last chicken in the shop' look?") that he elects to become a mechanoid again ASAP.

The early appeal also came down to the mixture of laughs and tragedy, pathos and comedy, particularly in the character of Rimmer and in Lister's loneliness which he only manages to surmount by devoting every waking hour to winding Rimmer up. Red Dwarf is a sitcom but one with tremendous and maybe unparalleled characterisation.

There's also something admirable about the show in how it refuses to die. Seasons 2-6 were inarguably the show's golden period and it's been variable ever since Rob Grant left (reaching a nadir in Season 9 but then recovering strongly since then), but it constantly explores new SF ideas and finds new angles with which to approach the universe and the characters. It also helps that the actors were mosty in their twenties when the show started; the transition of these young twenty-something men into middle-aged and slightly world-weary fifty-somethings has felt very natural, helped by the fact they have pretty good genes. I can see these guys still exploring deep space and finding fun ways of doing so in another ten years. The show's long hiatuses, resulting in only 12 seasons in 30 years, have also helped in building up anticipating for the show's return and in giving the writers more time to come up with new ideas.

Red Dwarf is one of science fiction TV's great survivors, being funny, dramatic and human as required. Here's to many more years of exploring the final, smeggiest frontier.
Posted by Adam Whitehead at 14:30