Gentleman Jole and the Red Queen by Lois McMaster Bujold

Three years have passed since the death of the legendary Aral Vorkosigan. His widow, Cordelia, continues to live and work on Sergyar, third world of the Barrayaran Empire, as vicerine. Aged 76, but expecting to live at least to 120, Cordelia has almost fully half her life ahead of her and is unsure of what to do with it. Complicating matters is Admiral Jole of the Sergyar Fleet, a respected officer and a close friend of Cordelia and her late husband's. With Sergyar in political uproar as a controversial decision to move the planetary capital is made, Cordelia has some important decisions to make. 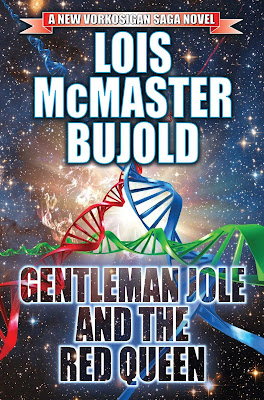 Gentleman Jole and the Red Queen is the latest (so far) novel in the Vorkosigan Saga and one of the most wrong-footing. Each of the sixteen novels in the series has been different, but at least incorporated some elements of action-adventure, political intrigue, war or undercover criminal activity, which the protagonist (usually Miles Vorkosigan but occasionally other characters) has to deal with. This novel doesn't have that. There are no villains, there are no explosions (well, one, but not quite what you'd expect) and no exchanges of energy weapon fire. The political intrigue is very slight, at best, and the novel is unfolds without much fear of mayhem, death or destruction taking place (unless you count a rather remote threat from a volcano).

Instead, this is a novel about relationships, the changing nature of life as people grow older, and the philosophical acceptance that we are not here for very long and people have to make decisions for their happiness and that of those around them, sometimes unorthodox or complicated ones. The tensest moments in Gentleman Jole and the Red Queen come in conversations, as Cordelia is forced to reveal that she's been leading a rather more interesting life on Sergyar then her son Miles believed and grapples with the baffling decision of just how you start a new life over when you've already done all the usual stuff - had children, gotten married and beheaded your most lethal political opponent in battle?

In this sense Gentleman Jole continues the themes from Cryoburn, musing on the passing of the generations, but the book again rejects this as a maudlin idea. Instead it also celebrates the commodities of life and time, delights in the arrival of new life and new children (and grandchildren) and spins out, in a good-old fashioned manner, an everything-but-old-fashioned romance between two people at a more mature time of their lives.

Gentleman Jole and the Red Queen (****) is not a rousing space action-adventure novel. It is a life-affirming, warm romance that returns to some some of Bujold's central SF ideas (most notably the science of uterine replicators), introduces some new ones (Cordelia's utter disbelief at people refusing to believe a destabilising volcano may erupt and destroy their town) and unfolds with a stately, mature pace. Is it slightly self-indulgent? Maybe, but then after thirty years of putting the Vorkosigan clan through the wringer, both the author and her characters deserve a break, especially when it's as thought-provoking and enjoyable as this one. The novel is available now in the UK and USA.
Posted by Adam Whitehead at 18:15