It's a world where human beings have become digital information, swapped between bodies, backed up on the cloud and sometimes illegally copied. It's a world where centuries-old rich folk - the 1% of the 1% of the 1% - have formed a vaguely bored and utterly corrupt elite watching over the rest of the human race. It's a world utterly unprepared to deal with a man named Takeshi Kovacs, an Envoy from Harlan's World, an utterly formidable soldier who swaps bodies as easily as swapping guns. He is called in to solve an impossible murder, and in the process flushes out the demons of his own past. Welcome to Bay City, Earth, 2384. 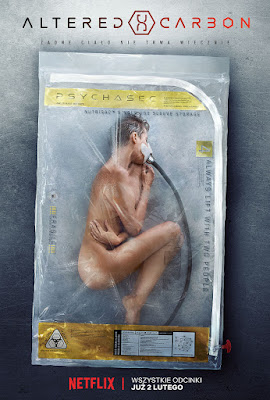 A few years ago, Hollywood suddenly decided that cyberpunk was going to be the next big thing. Ghost in the Shell and Blade Runner 2049 were commissioned as films, Harebrained Schemes resurrected Shadowrun as a video game franchise and (over in Poland) CD Projekt Red began developing the Cyberpunk 2077 video game, whilst Netflix picked up Duncan Jones' Mute as an original movie. Netflix also commissioned Altered Carbon, a 10-episode adaptation of Richard Morgan's 2002 novel of the same name, an early classic of 21st Century science fiction.

The brief cyberpunk bubble has burst with the disappointing under-performance of Ghost in the Shell and Blade Runner 2049 (despite the latter's visual and thematic brilliance), which must have led Netflix to feeling nervous about Altered Carbon. A violent, complex story rooted in graphic violence and a fair amount of sex whilst asking questions about humanity, immortality, death, family and morality, it's dense, sprawling hard-edged and sentimental, with a fairly complex plot. Early reviews have also been mixed. 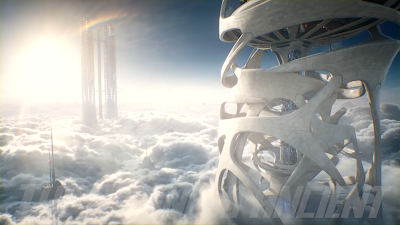 Fortunately, these fears can mostly be laid to read. Altered Carbon is a dramatic, compelling drama with great performances, outstanding visual effects (the astonishing CGI may be the finest ever put on the small screen, even if it comes at the cost of a surprisingly small number of well-used sets) and which has a lot to say about the dangers of immortality, the corrupting influence and power of money and the little people going up against an uncaring system. Little of what Altered Carbon has to say is new, but the renewed relevance of its themes to modern society certainly makes it worthwhile to reassess them.

Our main focus is on Takeshi Kovacs, played for most of the run-time by Joel Kinnaman. Kinnaman has been criticised in the past for being a bit bland, but is surprisingly good in the main role. He is great in the action scenes, nails the painful interrogation sequence from the books and does a good job of portraying the different characters of Kovacs and Ryker (the former owner of Kovacs' new sleeve). Kinnaman's range is not great but he does "brooding, annoyed intensity" very well. He is even exceptional in a sequence that feels like Kovacs just walked out of the books, where he manipulates a woman into giving him vital information by (cynically) engaging her empathy.

We also get lengthy flashbacks to Kovacs' time as an Envoy, where he is played with earnest charisma by Will Yun Lee. These sequences also see significant screen-time for Kovacs' former Envoy allies Reileen Kawahara (Dichen Lachman) and Quellcrist Falconer (Renee Elise Goldsberry), both of whom are outstanding and powerful (especially Goldsberry, who has to be severe, military, charismatic and emotional at the same time, all without damaging the character, and pulls it off). The Envoy/Harlan's World backstory has been significantly changed for the TV series, which some fans are concerned about. The primary motivation for these changes is that in the book Kovacs is a loner who lives in his own head most of the time, rarely making connections with other human beings and only reluctantly being drawn into friendships and alliances with other people. These changes are designed to make Kovacs a more relatable character, giving him more of a family and making him less of a solo operator. This is due to the limitation of the television format: no matter how good the actor, spending eight or ten or thirteen hours with one person would eventually get old.

In the present-day storyline, the TV show gives dramatically expanded roles to Kovacs' sentient hotel sidekick (Chris Conner's Edgar Allan Poe replacing Jimi from the books, thanks to the Hendrix Estate not giving out the image rights), Bay City police detective Kristin Ortega (Martha Higareda), ex-soldier Vernon Elliott (Ato Essandoh) and, via flashbacks,  This makes the series less claustrophobic than the books but also less intense, and the intensity of the novels is kind of one of the points.

The expanded casting is a success: Martha Higareda gives Ortega a sense of intelligence and a barely-contained fury which explodes on several rather memorable occasions. As effectively a co-lead to Kinnaman in several episodes, Higareda makes Ortega a compelling protagonist and another window on this future world, with her Christian family divided over the morality of re-sleeving and cheating divine judgement. Essandoh has less to do until the last few episodes, when his complicated family situation gains renewed relevance, but gives a solid supporting performance as a damaged human being looking to fix what's gone wrong with his life. Chris Conner is simply outstanding as Poe, and any regrets about not getting Jimi from the books are soon swept away as we do get to see the sentient hotel AI joining forces with Kovacs as a partner (an idea hinted at in the novel but left resolutely unfulfilled), which is filled with both humour and pathos. 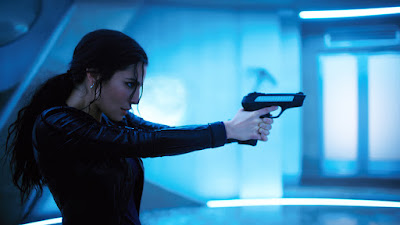 James Purefoy is also excellent as Laurens Bancroft, the 300-year-old "Meth" whose murder (and subsequent amnesiac resurrection in a new sleeve) sets the story in motion. Purefoy eats up these kind of morally conflicted-but-charismatic roles for breakfast (see also his outstanding turn as Marc Antony in HBO's Rome) and is on top form in this series. It's also good to see his actor's integrity stands firm (so to speak): in Rome he was annoyed by how the actresses were asked to disrobe on a fairly regular basis but not the male actors, so demanded a scene be written to show his solidarity (again, so to speak) with them. This fine tradition continues unabated in Altered Carbon, and it would be disappointing if he didn't rib Kinnaman about the latter's reluctance to also appear unadorned (complete with some mildly ridiculous strategic towel/camera placement).

The pacing is also pretty good. Netflix shows often struggle with how to structure their stories over 12 or 13 hours (often because their stories don't warrant 13 hours in the first place), but Altered Carbon only has 10 episodes to fill and a fairly dense 500-page SF novel to draw on, so each episode is fairly full to bursting with character moments, worldbuilding, flashbacks and action. Several episodes draw back from the bustle and shine with laserlike focus: episode four with its torture storyline is uncomfortable viewing but it does help get into Kovacs' mindest. The resolution to that story is arguably the novel's "Red Wedding" moment (with an arguably better cathartic outcome) and the TV show nails it. Episode seven is mostly set on Harlan's World and explores Kovacs' backstory in much greater detail and works really well. 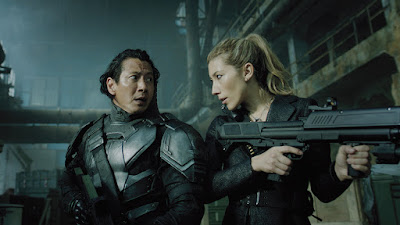 Alas, the show is far from flawless. Some of the changes to the Envoys and backstory make sense but others do not, and will make adapting the second and third books more difficult. There's no real tackling of the idea that the stacks may simply be recording a copy of someones personality and memories, not their actual consciousness (the ability to double-sleeve in fact pretty much proves that people still die, with just a copy living on, just there's no real existential exploration of this idea), although as I recall the novel doesn't really delve into that either. The "murder mystery" storyline occasionally gets forgotten about for entire episodes, and some developments in the case feel like they came out of absolutely nowhere. Kristin Lehman's Miriam Bancroft is a decidedly unengaging and uninteresting character. Most annoying is the show's decision to keep deploying "mumbly dialogue syndrome", with the characters (particularly the accented Kinnaman and Higareda) either forgetting to enunciate properly or (more likely, given there's plenty of scenes where they're fine) the sound not being mixed properly. The original music is also pretty forgettable, although there's some good use of songs.

Altered Carbon (****) is a hard-edged and interesting science fiction show with incredible visuals and good performances, suffering a little from some muddy plot developments and under-exploration of the central premise. With a second season already in the planning stages, it'll be interesting to see where Netflix takes Takeshi Kovacs next. The show is available worldwide right now on Netflix.
Posted by Adam Whitehead at 15:00

I'm hoping to find time to watch this soon, and I hope they did a great job, as these are some of my favorite books, especially the second one. This so makes me with the showrunners would check out my novel The Immortality Game, since I wrote it essentially as a distant prequel to Altered Carbon. I was curious what the resleeving tech might have been like when it was first being developed, so that formed the basis of my story.

Up to ep.5 and I am struggling. A fair bit of sexposition (strip club conversations) and soft-core (Eps 2 and 5) don't make up for an underexplained story. Its also a bit humourless so far, lots of grumpy people, a fair bit of yelling.

I gave up after episode 2 or 3. The change they made to the origin of the Envoy Corp simply didn't make sense and closed off a lot of future opportunity for further stories. Worst, it seemed arbitrary, and not driven for any particular plot reason.