The Klingon moon Praxis has exploded, disrupting the Empire's energy production and polluting the atmosphere of the Klingon homeworld. The United Federation of Planets sees the catastrophe as an opportunity, offering assistance in repairing the damage in return for a lasting peace. The Klingon Chancellor travels to Earth to negotiate the treaty but is killed, his assassination pinned on Captain Kirk, a well-known enemy of the Klingon Empire. With Kirk and McCoy imprisoned, it falls to Captain Spock and the Enterprise crew to exonerate their comrades, rescue them and stop those who are determined to end the chances of peace forever. 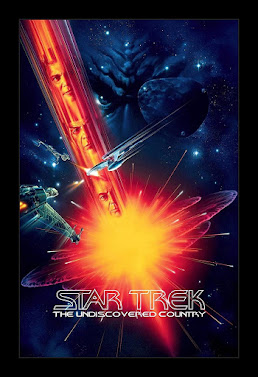 With the release of Star Trek V in 1989, it was felt that the time of the original Star Trek crew had come to an end, and the next film would star the Next Generation crew. However, Paramount were not keen on waiting until The Next Generation finished before making a new movie in the franchise. Plans for a prequel film set at Starfleet Academy also failed to excite anyone. At the same time, the collapse of the Berlin Wall and the end of the Cold War was firing up the excitement of Leonard Nimoy and Wrath of Khan writer-director (and Voyage Home co-writer) Nicholas Meyer, who saw the opportunity for a great analogy with real-life events. The frugal Meyer's involvement worked for Paramount, who wanted to make the film for less money than the disastrous Final Frontier, and also for Nimoy, who had pondered directing but knew it would annoy co-star Shatner; Meyer was a neutral figure everyone respected and whose work on two previous movies had been lauded. The meme that "every odd-numbered Star Trek film is rubbish" had started gathering pace by this time as well, so the fact the next movie was an even-numbered one and Meyer had worked on the two previous even-numbered films was encouraging.
Star Trek VI is not a subtle film. The comparisons to contemporary politics are fairly obvious, with the destruction of Praxis being basically Chernobyl in space, and the Klingon-Federation peace talks are the end of the Cold War by any other name. However, the film does start building a genuine sense of mystery. When the Enterprise fires on the Klingon ship, despite its records showing a full set of torpedoes on board, it creates a paradox that Spock, Scotty, Chekov and Uhura have to work to unravel. This is great fun - Star Trek usually handles mysteries well, at least those that do not bog down in technobabble - and is preceded by some very powerful scenes employing actors of the calibre of David Warner and Christopher Plummer (an old friend of Shatner's, who's clearly having an absolute whale of a time) as they debate realpolitik and quote Shakespeare. There some startling scenes as Kirk has to confront his racism towards the Klingons, inspired by his constant struggles with them and their murder of his son (in The Search for Spock). Characterisation is strong and the actors do well with the material, Meyer again getting a great performance out of Shatner (though he seems more willing to let some hammier takes go through, possibly due to a lack of time and money) and Nimoy showing up with his A-game, having understandably lost the will to live during The Final Frontier.
The film also features George Takei's best performance as Sulu, as well as giving him much more to do as the Captain of the Excelsior. More disappointing is the absence of Saavik, who was originally supposed to be the traitor on the Enterprise. Kim Cattrall auditioned for the part and impressed Nimoy and Meyer, but was unimpressed to learn she would be the third actress to play the role and turned it down. The producers agreed to rewrites making her a new character, Valeris (Cattrall even named her). However, the script was not adjusted to fit a more Vulcan-like character, leaving Saavik's more emotional tendencies (a result of her supposed half-Romulan heritage, although that revelation had been cut out of The Wrath of Khan) in place with a supposedly purely-Vulcan character. Cattrall does as good a job as she can as Valeris, but the character is somewhat under-written as a result of the changes.
The sequences on Rura Penthe are also disappointing; the lack of budget results in unconvincing sets and iffy alien makeup, though Iman gives a good performance as Martia, and the sequence relies a lot on Shatner and DeForest Kelley's effortless banter to get through it.
The film has a rousing climax with a solid space battle, and it's good to see the constantly-hamstrung USS Excelsior finally cutting loose and showing what it is capable of. The fact that this time everyone knew they were making their last full picture together makes for a more final and emotional ending, enhanced by the fact that the film launched in Star Trek's 25th anniversary year and that Gene Roddenberry sadly passed away shortly before the premiere.
Star Trek VI: The Undiscovered Country (****) is not as accomplished as either The Wrath of Khan or The Voyage Home, but comfortably emerges as the third-best Star Trek film, with some excellent characters and storylines and some great dialogue. Only a few clunky scenes and budget constraints hold it back from matching the earlier two Meyer films.
Posted by Adam Whitehead at 18:23