Orbit Books are prepping a new edition of The Eye of the World, the first Wheel of Time novel, for release on 4 November 2021. This suggests that the TV show will hit screens around that time, maybe a week to a month later. 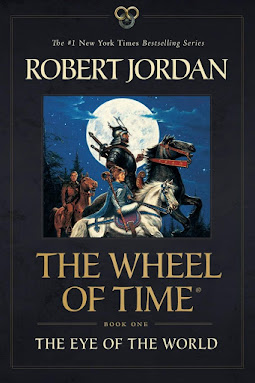 This news seems to coincide with rumours (via WoTSeries) that Amazon are planning a release window for The Wheel of Time running between 25 November and 25 December, with Friday 26 November (Black Friday) being the preferred date. That's a bit later than was previously expected: the show completed the bulk of its filming last November, with only a few pick-up shots left to complete (the show reportedly wrapped principle photography a few days ago, with a few last pickup shots and plates being filmed this week; Season 2 starts shooting in a couple of weeks). Post-production and vfx on the completed episodes had been running for months, with the work needed to edit and slot in the last few shots not believed to be particularly onerous. Some rumours put an airdate as early as September.

Seeing when a tie-in edition of a novel - likely with some kind of still image or photograph from the show on the cover, with the TV show logo prominently displayed - is coming out is a tried-and-tested method for discerning the release date of a show or movie based on a book, although it can backfire a little. Most publishers try to time the release so it happens quite soon before the TV show comes out; TV tie-in editions of A Game of Thrones were released just one week before the HBO TV show debuted in 2011, for example, but tie-in editions of The Lord of the Rings started appearing a month or so before the movie aired in 2001. The Witcher didn't really get a TV tie-in edition (at least not here in the UK), instead getting stickers popped on the covers of existing editions several weeks before broadcast.

The signs are very good then that The Wheel of Time will hit Amazon Prime in November, with 26 November being maybe the most likely date, but even earlier in the month is not impossible.

Assuming the first three episodes would drop together followed by five weekly releases, that would see the final episode release on 31 December 2021, meaning the entire first season would air before this year ends, which would be good going.

Of course these dates can change until the studio formally confirms them, but for now it looks good that we'll be seeing the show on air before the end of this year.

Email ThisBlogThis!Share to TwitterShare to FacebookShare to Pinterest
Labels: amazon prime, amazon tv, rafe judkins, robert jordan, the eye of the world, the wheel of television, the wheel of time