In a surprise announcement, Jeff Bezos, the head of Amazon, has personally confirmed that his company is developing Iain M. Banks' Culture series of science fiction novels as a television series. The series will open with an adaptation of the first novel in the series, Consider Phlebas. 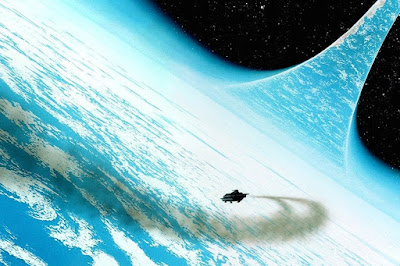 Originally published in 1987, Consider Phlebas introduces the Culture, a hyper-advanced, post-scarcity civilisation which appears to be a utopia. However, the existence of the Culture is dependent on the incredibly sophisticated AIs known as Minds, which control most of the Culture's ships and space habitats, and also on the existence of Special Circumstances, an elite intelligence agency which intervenes on other worlds to stop them developing into a threat against the Culture (or the rest of the galaxy). Consider Phlebas is set during a brutal war between the Culture and the Idiran Empire and follows the misadventures of the central character, Horza, a mercenary hired by the Idirans to recover an imprisoned Mind from a distant planet.

Banks published nine novels and a short story collection set in the Culture before his untimely death from terminal cancer in 2013. The novels were immensely critically-acclaimed and sold well. Banks also published three SF novels not related to the Culture and fourteen "mainstream" novels (Banks published SF under the name "Iain M. Banks" and non-SF as "Iain Banks"), three of which - The Crow Road, Complicity and Stonemouth - have been adapted for the screen.

The Culture novels have been hugely influential, with Banks regularly acclaimed as the greatest British SF author of his age. The Culture Orbitals - massive, ring-shaped artificial planets (theselves a more plausible iteration of Larry Niven's Ringworld concept) - are one of the main influences and inspirations for the Halo series of video games. Elon Musk has also cited Banks as a literary hero, even naming two of his drone ships after Minds from the books. Bezos himself is also a major fan.

Dennis Kelly, the acclaimed showrunner of Utopia, is developing the new series, which apparently is guaranteed a direct series order if the scripts impress.

Amazon is on a bit of a roll recently, having also greenlit new TV series based on J.R.R. Tolkien's The Lord of the Rings and Robert E. Howard's Conan the Barbarian character.
Posted by Adam Whitehead at 18:51

The main reasons to which this show might turn out gold:

Dennis Kelly only got to show his talents as a showrunner through Utopia which was a special blend of geek madness, surprisingly creative violence and excellent atmospheric composition through frames and music. Not to mention that the morale compass of its main plot was so expertly skewed that I never knew with which characters and teams to root for.

Dennis Kelly has been under the radar after "the network" shut him down back in 2014. That show was so good that David Fincher wanted to make a reboot in America but this was also ceased in its initial phase by "the network".

Here's hopping this show takes off and Dennis Kelly becomes even more acknowledged.