Twenty-five years ago today, the pilot episode of Babylon 5 aired on US television for the first time. It was the culmination of five years of hard work, as I have detailed here. 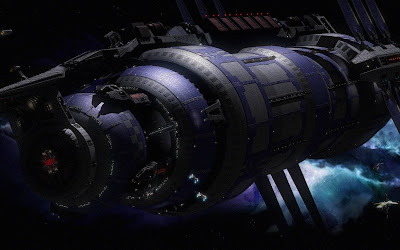 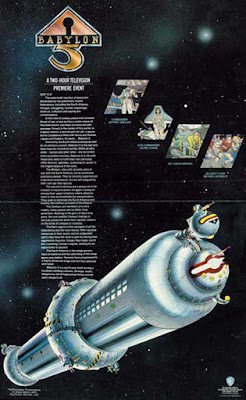 Babylon 5 was an important and influential TV show. It was the first network American TV series to have a detailed, pre-planned, multi-year story arc. It eschewed the normal format of episodic television to deliver an epic, massive saga, told over five years and 110 stories that cumulatively tell one story with a beginning, a middle and an end. Although several writers contributed to the show - including veterans of the original 1960s Star Trek and even Neil Gaiman - it was largely the work of one man, J. Michael Straczynski, who wrote 91 of the 110 episodes (including the entire third and fourth seasons), plus the pilot and a further six TV movies. It certainly wasn't auteur television but in terms of being the creative vision of one showrunner who was responsible for the direction of the series, it helped consolidate a trend (previously hinted at by Stephen Bochco and David Lynch) that is in full flow in television culture today.

Babylon 5 is the story of the titular space station, a five-mile-long trade hub and diplomatic gathering place functioning as an interstellar United Nations. Five major powers - the Earth Alliance, Centauri Republic, Narn Regime, Minbari Federation and Vorlon Empire - and two dozen or so lesser ones (the League of Non-aligned Worlds) have come together to help keep the peace and facilitate interstellar commerce and diplomacy. It's revealed early on that the human race and the Minbari fought a devastating war that ended with the Minbari battle fleet closing in on a barely-defended Earth, only to mysteriously abandon the campaign and leave. It's regarded as an act of mercy by a more powerful and advanced race towards a lesser one...apart from by the station commander, Jeffrey Sinclair, who has no memory of the final 24 hours of the war, and was bizarrely chosen to command the station over a dozen more experienced officers. 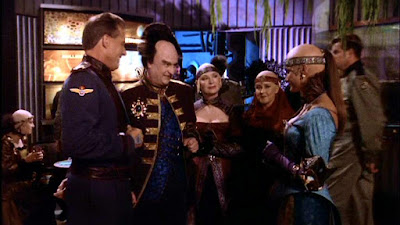 Over the course of the first season, the show focused on crisis-of-the-week storylines, such as the station dockers going on strike after Earth refuses to pay for more advanced and safer equipment after a horrendous accident kills several workers, and also on a series of longer-running mysteries. Sinclair's missing memories (which gradually start to return) is the most prominent of these, but there are also the military provocations by the resurgent and belligerent Narn Regime against their former conquerors, the Centauri, which infuriate the proud Centauri Ambassador, Londo, whose constant plans to stymie the Narn are frustrated by what he considers to be a cowardly government...until he is offered a deal with the devil that rapidly spirals out of control. Other storylines are more mundane, such as Security Chief Garibaldi's constant struggles to stay sober and first officer Ivanova's constantly painful family and love life. In Season 2 the show unexpectedly has the Babylon Project's mission of peace ending as two of the major powers go to war, manipulated by shadowy forces behind the scenes. Later seasons see the outbreak of a massive galaxy-spanning conflict, with the station's crew going from bureaucrats and pen-pushers to big damn heroes, doing whatever it takes to make sure they and their homeworlds survive.

Babylon 5 is unapologetically big, brash and fun space opera, but layered inside it are many other stories, some of them comic, some of them desperately tragic. The cast of characters (regular and recurring) is huge, most of them well-played and given often joyously brilliant dialogue to play around with. Babylon 5 can also be a satire, particularly of the American Dream and how easy it is for democracy to be subverted into fascism. Babylon 5 is also a great tribute to many other works of science fiction, name-checking authors like Isaac Asimov and Alfred Bester and employing Harlan Ellison, David Gerrold and Neil Gaiman directly as writers. Babylon 5 is noteworthy for winning the Hugo Award for Dramatic Presentation twice, back-to-back, at a time when the award was still given to both TV shows and movies. 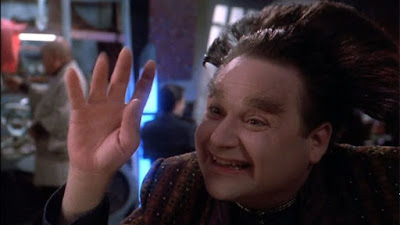 Babylon 5 also broke the mould in its ground-breaking use of CGI for visual effects, being way ahead of the curve in the use of computers to do what only models had done up to that point. It was also influential in how it was shot and filmed on an incredibly tight budget, becoming one of the most critically-acclaimed SF shows on-air despite having a budget roughly one-third that of the Star Trek series airing at the same time.

Babylon 5 was far from perfect. There are quite a few weak episodes, most of them in the first and fifth seasons, and there were frequently cheesy lines or slightly awkward exposition scenes. Several times the carefully-planned storyline was thrown for a loop by an actor quitting the show unexpectedly, leading to some course-correcting. But each time, Straczynski and his team righted the boat and got the show back on course. 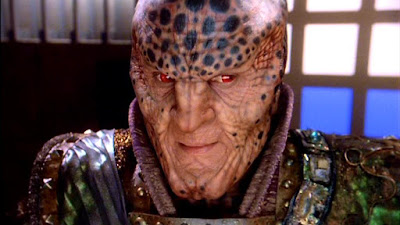 The influence of the show is tremendous. Joss Whedon watched and enjoyed the show, and made the character of Xander on his Buffy the Vampire Slayer series a Babylon 5 fan (he even had the collector's plates!), as well as drawing on some of the show's structural ideas for his own shows. Firefly's use of actual Newtonian physics in space can also be seen as a nod to B5, which pioneered the idea. Damon Lindelof was also a big fan, citing Babylon 5 as a major structural influence on Lost. George R.R. Martin, an old sparring partner of Straczynski's from the SF convention scene, was an appreciator of the show. Daniel Abraham drew on the show for ideas for his Dagger and the Coin fantasy series (which also mixes politics, military action and economics alongside the return of an ancient, spider-like force). The Wachowskis were also big fans of the show, and later worked with Straczynski on the Netflix series Sense8.

Happy 25th Birthday, Babylon 5. Possibly no other series - book or TV - has had such an important impact on myself and my appreciation for writing and scriptwriting. It may also hold a special place in the pantheon of TV series, even today in the so-called "Golden Age of Television." There are shows since B5 aired that had better effects and better individual episode scripts but none (maybe excepting - and maybe only excepting - The Wire) have executed a multi-season, multi-character storyline on such a scale anywhere near as successfully. For that reason, it is a show that must be respected and given its due.

Just a reminder that I am also currently engaged in the great Babylon 5 Rewatch Project, which is approaching the end of Season 4.
Posted by Adam Whitehead at 00:20

BABYLON 5 WAS A WATERSHED FOR ME. IT IS IN MY DNA.IT WAS THE BLOOD, SWEAT AND TEARS OF ONE MAN, J. MICHAEL STRACZYNSKI AND JUST BLEW ME AWAY.IT IS THE BEST SF PROGRAM EVER TO ME AND THANKS FOR THE TRIBUTE. B5 4EVER.

How many others were passed over as commander of Babylon 5? You mentioned that there were dozens of people that the Minbari rejected until Jeffery Sinclair was accepted. I had heard from somewhere that 40 to 50 higher ranked officers were on the list before they came to Sinclair. The only reference from the show that I recall is from episode 113 "Signs and Portents" where Garibaldi tells Sinclair that generals and admirals were lining up for the position.

I don't think a number is ever put on it in the show itself. Cut dialogue from "Eyes" would have said that Zayn (the crazy interrogator) was one of those passed over for command. I think the idea was Sheridan was also on the original list, higher up than Sinclair. Otherwise we have the "Signs and Portents" claim that there were multiple admirals and generals up for the job.

I just love this

A show that made a huge impact on me as well. I would recognize later this kind of storytelling in the doorstopper fantasy sci-fi novel series, like Wheel of Time, A Song of Ice and Fire and Malazan.

Really Awesome Blog Thanks for Sharing.