In surprising news, Variety has learned that HBO are developing another Game of Thrones prequel series, this time based on George R.R. Martin's Dunk & Egg series of novellas. This is in addition to House of the Dragon, which is currently in pre-production and casting, and the Long Night pilot, Bloodmoon, which was shot in 2019 but HBO declined to pursue to series. 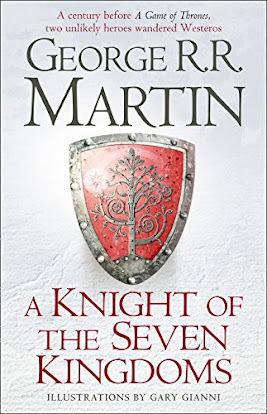 The Dunk & Egg stories begin eighty-nine years before the events of Game of Thrones (or the first Song of Ice and Fire novel, A Game of Thrones) and chart the adventures of Ser Duncan the Tall, a newly-minted common or hedge knight, and his squire, "Egg," a young boy who is more than he seems. George R.R. Martin has so far written three novellas about the characters: The Hedge Knight (1998), The Sworn Sword (2002) and The Mystery Knight (2010), with these three stories combined and released as A Knight of the Seven Kingdoms in 2015. Martin had planned for around twelve stories in total spanning some fifty years, with the next two, The She-Wolves (not the final title) and The Village Hero, already sketched out and partly written, but on hold until he completes the next Song of Ice and Fire novel. He also alludes to Dunk and Egg's further adventures in his companion book, The World of Ice and Fire (2014), as well as seeding mentions of their adventures in the mainline series novels. Duncan is also mentioned several times in the Game of Thrones TV series.

The Dunk & Egg stories are extremely popular with fans and have seemed ripe for adaptation for many years. Martin has downplayed such a possibility due to his disappointment that HBO overtook him with the main TV series and did not want to repeat the process with Dunk & Egg. Martin has reiterated this many times over the years, to the point of refusing even to hear pitches about the idea. Martin's contract with HBO gives Martin veto over future Game of Thrones spin-offs that do not meet his approval (at the cost that he cannot take material set in the same world to other networks or studios).

The fact that a series is now in development indicates that Martin has changed his mind. It may be that Martin has concluded that with The Winds of Winter already nine years in the works and a further novel to follow, it will simply be far too long before he is able to focus on Dunk & Egg and the stories will not get written in a reasonable timeframe if he continues to wait. This way, he can provide outlines for each of the twelve stories and have other writers develop them into scripts, and they can reach fans much more quickly.

From HBO's point of view, there is tremendous value to the project. It is much closer to the timeframe of Game of Thrones itself and characters from the earlier series can actually appear (the notorious Walder Frey actually appears as a baby in The Mystery Knight). The stories are more straightforward, eschewing the high-budget magic and massive battles of the parent series in favour of more focused adventures on the roads of Westeros. A more episodic road-trip of a series would also contrast favourably with House of the Dragon, which is likely to be very expensive and complex in its storytelling.

The project is in very early days at HBO and HBO have not yet made a pilot or series order, and it may yet not make the grade. However, it sounds like HBO are very keen to get the ball rolling on a series. If so, we should hear more news later this year.

Meanwhile, House of the Dragon is currently knee-deep in casting. It recently added Matt Smith as Prince Daemon Targaryen, Emma D'Arcy as Princess Rhaenyra Targaryen and Olivia Cooke as Lady Alicent Hightower, along with Paddy Considine as King Viserys Targaryen. Shooting is expected to begin at the Warner Brothers Studios, Leavesden, in the next few weeks for a 2022 debut.

EDIT: James Hibberd at Entertainment Weekly has added more information, confirming that a number of other Game of Thrones-related pitches are currently circulating at HBO and that the network is looking to woo back Bruno Heller, who created and ran the series Rome for them in 2005-07, to get involved. Apparently one pitch under discussion is a show based on Robert's Rebellion, the civil war that brought King Robert Baratheon to power, and is set only seventeen years before the events of Game of Thrones itself, with younger versions of characters like Ned Stark, Littlefinger, Ser Barristan Selmy and Jaime and Tywin Lannister playing key roles. George has been much more vociferous that a Rebellion-era series is unnecessary, which makes me wonder if all these reported pitches are actually pitches to George rather than having already consulted with him. If so that may cast the likelihood of a Dunk & Egg series in some doubt (although I could see George relenting on D&E long before the Rebellion).

Hibberd reports that HBO are looking at Game of Thrones as a streamer-establishing franchise for the HBO Max service, hoping to replicate the huge success of the various Star Wars and MCU shows (so far) on Disney+ and the multiple Star Trek shows on CBS All Access, and it sounds like projects are also in development.

Email ThisBlogThis!Share to TwitterShare to FacebookShare to Pinterest
Labels: a game of thrones (TV series), a knight of the seven kingdoms, dunk and egg, george r.r. martin, hbo, house of the dragon, the hedge knight