A high-definition version Babylon 5 has been released on HBO Max in the US today, until the title of "Babylon 5 Remastered." The international Amazon and iTunes version of the show have also been updated to the new format. 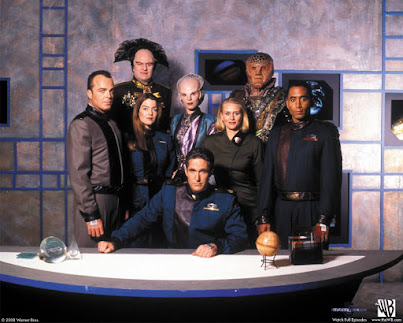 I previously reported last year that a "remastered" version of Babylon 5 had been released on some streaming services, although it was released in standard definition only and the only major change had been shifting the format back to the 4:3 (non-widescreen) image that the show had been originally broadcast in. This change in format was good news because it meant restoring the show's pioneering CGI to its original format. The show had originally had its live-action footage shot in and protected for widescreen, but the CG and composite (live action/effects combinations) shots were only created in 4:3. To overcome the problem, the show's previous widescreen releases (such as on DVD) had cropped the effects footage by zooming into the image until it filled the screen, resulting in a loss of image quality. However, the "remaster" in standard definition otherwise seemed a bit pointless.
Today's move significantly improves the live-action image quality, with that footage now in higher definition. Warner Brothers report that they rescanned the original film negatives to create HD live-action shots (complete with colour correction and removing damage and problems) and have improved the CG footage by reverting to the original 4:3 image and applying some up-resolution techniques. These techniques have limits - the CG and composites still look lower-resolution and somewhat blurrier than the live-action footage - but they do look moderately better than before. The biggest problem is the credits at the start of each episode which now look somewhat washed out. Also the title sequence was natively created in widescreen even in the 4:3 cut, making the titles look almost comically tiny in the centre of the screen, which is a shame but unavoidable without remaking them from scratch.
The result is, having watched one episode to completion (Season 3, Episode 10, Severed Dreams) and sampled scenes from several others (And Now For a Word, Intersections in Real Time), probably the best the show has looked to date. The live action scenes are much better and the CG, although definitely still blurrier than is ideal, is at least hugely improved over the DVDs and the previous streaming releases. The loss of the widescreen live-action footage is a shame, though, and I suspect will annoy some fans, even as the improvements to the effects shots will please many others.
The new HD-ish version of Babylon 5 is also apparently headed to Blu-Ray, with various news sites and international sellers claiming that a box set release could happen as early as March, although some sites have since changed their dates to December, suggesting a date is not fully fixed.
There are several problems with the remaster. The first is that whatever technique they used to re-scan the original footage was clearly not on a par with the excellent Star Trek: The Next Generation remaster undertaken in 2012-15. The live-action footage from that remaster looks like it was shot yesterday, the footage in Babylon 5 does...not. It's still a big improvement on what we've seen before, but it's clearly not in that league. There are still artifacts particularly in dark scenes where pixilation is clearly occurring, probably not helped by the bitrate most streaming services use; these issues may not be present on a Blu-Ray transfer.
The pilot episode, The Gathering, has also not bee remastered; the original film footage was either lost completely or badly damaged in flooding in the studio (one rumour back in the day was that the film had also been nibbled on by rats), so it is presented in standard definition.
More concerningly, there are about three minutes of material missing from Season 1, Episode 20, Babylon Squared and around two minutes missing from Season 4, Episode 1, The Hour of the Wolf. Hopefully this will be fixed soon and will not be on the Blu-Ray release.
It is clear, unfortunately but understandably given Babylon 5's relative obscurity, that Warner Brothers are not prepared to spend the ~$20 million or more it would cost to completely remaster the show properly, that is do a high-quality scan of all of the film footage and then re-render the CGI at native HD resolution in widescreen (although one fan has recently recreated some scenes using the original CG models and scene data files at a much lower cost, with impressive results).
It looks like this might be the best we're ever going to see the show looking. If so, it's a reasonable compromise and will make attracting new viewers a bit more palatable.
Posted by Adam Whitehead at 20:21

"The assassin I bought this poison from said the effect is nearly instantaneous"
"...'Nearly' instantaneous, Vir?"

Do you know if they fixed the opening credits? The DVDs (it might have just been the US releases) had the problem that they used the same credits for all episodes of a season, which meant spoiling Delenn's new appearance in the first episodes of season two and not reflecting the status quo changes in season four, i.e. the Security Chief title moving from Garibaldi to Zack Allan.

I will be so happy to have in Blu-ray. Has some of my disks stop playing the last 2 episodes on the disks.