Bethesda have posted an image hinting at new developments in their Elder Scrolls line of fantasy RPGs. 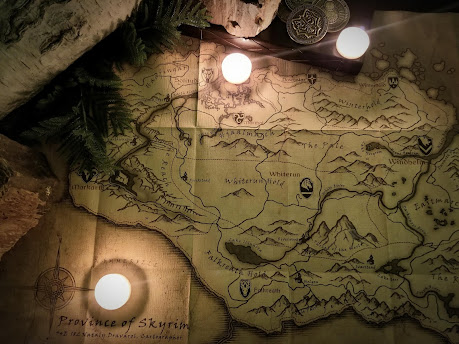 The Elder Scrolls is a bestselling series of video games, comprising the main games Arena (1994), Daggerfall (1997), Morrowind (2002), Oblivion (2006) and Skyrim (2011); and the spin-offs Battlespire (1997), Redguard (1998) and The Elder Scrolls Online (2014). The last main series title, Skyrim, is one of the biggest-selling games of the last decade, with over 30 million copies and sold and being ported to multiple platforms. With this year making the ten-year anniversary of the last game in the series, fans are increasingly antsy over when a sequel will be released.

Bethesda released their last big single-player CRPG, Fallout 4, in 2015, whilst a secondary team at the company developed a controversial multiplayer spin-off, Fallout 76, which was released in 2018. Bethesda also confirmed in 2018 that they are working on two new single-player games, a new IP title called Starfield and The Elder Scrolls VI, although they cautioned that the latter game was in a very early stage of development. Bethesda have repeatedly said that Starfield is their current main project and will precede The Elder Scrolls VI by several years.

For this reason, it is highly unlikely that the image Bethesda has posted has anything to do with Elder Scrolls VI, or if it does, it will be fairly obliquely, since Elder Scrolls VI is likely still many years away.

More likely is that the image refers to recent and possible future plans for The Elder Scrolls Online. The map has a candle located over the city of Solitude in Skyrim Province, a key setting for the recent Dark Heart of Skyrim expansion; other candles located near a set of coins, which were given away as collectibles for the recent Greymoor expansion for The Elder Scrolls Online (set in Skyrim), and a candle burning in the province of Hammerfell. We know the next expansion for Online is The Gates of Oblivion, and will tie in with the other-dimensional realm of Oblivion as well as possible new content in the Imperial Province of Cyrodiil (probably non-coincidentally tying in with the 15-year anniversary of the release of Oblivion), although intriguingly the map is oriented so Cyrodiil (south-east of Skyrim and east of Hammerfell) is not a focal point.

The candle burning in Hammerfell though may be a nod at The Elder Scrolls VI, as that province has been long-rumoured to be the main setting for the game. Hammerfell is the home of the Redguard, an important faction in the Empire, and a likely flashpoint between the Empire and the rival force known as the Dominion, whose machinations drove much of the main plot of Skyrim. This would also explain the game's long-rumoured working title, Redfall (although recently a freelancer who worked on Skyrim and may be working on Elder Scrolls VI has said that this is not the title, implying Bethesda secured the IP for another project).

I suspect we won't learn much more about The Elder Scrolls VI for a long, long time. In the meantime Bethesda are hard at work on their new IP, Starfield, reportedly a large-scale science fiction game set in the distant future and which will allow players to visit different planets. Bethesda Vice-President Pete Hines has hinted that we will get more news about Starfield this year, which excited some fans who noted that Bethesda's last two games have been formally announced and had release dates set within only four months, which has helped them avoid the problem of "overhype" which has beleaguered some other recent releases.