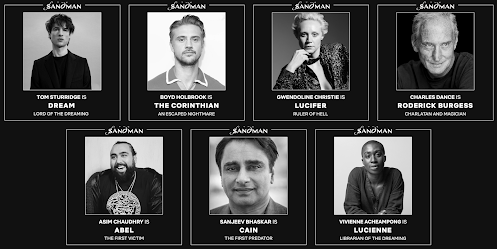 British actor Tom Sturridge is playing Morpheus, aka Dream, the Lord of the Dreaming and one of the Endless, seven beings given power over different facets of human existence. Sturridge is best-known for his stage work and for playing Henry VI in The Hollow Crown.
American actor Boyd Holbrook is playing the Corinthian, a nightmare in human form with teeth for eyes. He is best-known for playing DEA agent Steve Murphy in the first two seasons of Narcos. He also played the villain Donald Pierce in Logan.
Gwendoline Christie is playing Lucifer, the genderless fallen angel and ruler of hell. Christie is best-known for playing Brienne of Tarth on six seasons of HBO's Game of Thrones and Captain Phasma in two Star Wars movies.
Charles Dance is a British actor of long-renown, with roles in films such as The Jewel in the Crown, The Golden Child, Alien 3 and Last Action Hero, and TV series including The Crown and Going Postal. He is best-known to modern audiences for playing Lord Tywin Lannister on four seasons of Game of Thrones. He is playing Roderick Burgess, a man who tries to cheat his fate by imprisoning Death, but instead ensnares her brother, Dream, leading to chaos.
Asim Chaudhry is a British comedian best-known for appearing in the mockumentary series People Just Do Nothing and Hoff the Record (alongside David Hasselhoff). He is playing Abel, the first murder victim and brother of Cain. The two of them are doomed to repeat their cycle of murderer and victim forever in the Dreaming.
Sanjeev Bhaskar is a British comedian and actor of long standing, having risen to fame as one of the stars of Goodness Gracious Me and The Kumars at No. 42. He has played more serious roles, such as in the TV series The Indian Doctor and Unforgotten. He is playing Cain, the first murderer.
Vivienne Acheampong is best-known for her roles in The Witches, Famalam and Death in Paradise, as well as doing voice work for World of WarCraft. She is playing Lucienne, a genderflipped version of the comic book character of Lucien, the chief librarian of the Dreaming and one of Dream's key allies.
Many other roles are yet to be announced, with fans particularly keen on seeing who will be playing the iconic role of Death from the comic books.
The Sandman is currently shooting, with Neil Gaiman attached as writer and executive producer. The first season of the TV series is directly based on the first two graphic novels in the series, Preludes and Nocturnes and The Doll's House. It is expected to debut in late 2021 or early 2022.
Audible has also renewed their audio version of The Sandman, with a different cast, for two more seasons.
Posted by Adam Whitehead at 15:46