The Sandman: Preludes and Nocturnes by Neil Gaiman

If Watchmen is the greatest graphic novel of all time, then a serious case can be made for Neil Gaiman's The Sandman to be the greatest on-going comics series of all time. Running from 1988 to 1996, the series incorporated some 76 issues, collected as ten graphic novels (and more recently, four large-format prestige collections). Although an ongoing series, it was bound together by a long-running story arc that spanned its entire length, and told the story of Morpheus or Dream, one of the seven Endless who are manifestations of universal concepts (the others are Death, Delirium, Desire, Despair, Destiny and Destruction). Preludes and Nocturnes is the first part of the Sandman saga, collecting together the first eight issues of the series. 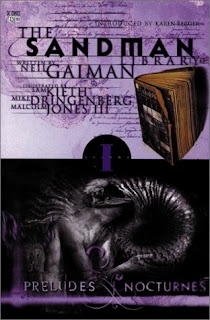 In 1916, an English sorcerer named Roderick Burgess attempts to capture and constrain Death, so that all humans will become immortal. The spell goes awry, and instead he captures Death's younger brother, Dream. Dream refuses to help Burgess with his quest for immortality and is left imprisoned in a magic circle in the cellar beneath Burgess' home. The absence of Dream is soon felt, as thousands of people across the world slip into a 'sleeping sickness' and cannot wake up. One of these people, a young woman named Unity Kincaid, is even raped and bears a child without ever waking up. Years and then decades pass. Roderick dies of old age and his son Alex takes over as Dream's captor. Finally, in September 1989, Alex accidentally breaks the circle (by driving his wheelchair over it) and Dream is freed. After visiting an original form of vengeance upon his captor, Dream sets about reclaiming the 'tools' of his profession and restoring his realm, the Dreaming, to its former glory.

Preludes and Nocturnes opens the Sandman saga in style, introducing the titular character (who is unusually front-and-centre for the duration of the story: many Sandman stories are notable for not featuring him prominently) and the world he lives in. Gaiman weaves an interesting story here. The Sandman's quest to find his pouch of sand, his gemstone and his helmet is a traditional mythic device, as is the descent into Hell to confront Lucifer to find one of the missing artefacts (this in turn sets up the very end of the series, with Lucifer's vow that, "One day I shall destroy him," setting up future events). At the same time there's a lot of other things going on. Established DC Comics villain Dr. Dee abusing the Sandman's powers to torment a diner full of innocent people is one of the more disturbing things you're going to see in a comic. The story ends with a triumphant Sandman driven strangely morose by his success, and unable to think of something else to do, he goes to feed the pigeons in Greenwich Village, where he meets with his sister Death, probably the most popular character in the series. The collection ends on an upbeat note, as the Sandman begins the task of restoring his realm and his life.

Preludes and Nocturnes is a great story. It's clearly early days for Gaiman and the story creaks a bit in places. It's also rather more obvious than the later, more subtle collections, and the desire for a somewhat plot-driven narrative to hook in the readers means that a lot of the more reflective moments from the later collections are missing. At the same time, revisiting the collection reveals a host of details that crop up again later on, such as an early glimpse of Merv driving a bus (he doesn't reappear until The Kindly Ones, the penultimate collection) and the introduction of Nada, Dream's former lover whom he condemned to Hell for reasons that will later be revealed. The book also wears its influences a bit more obviously than later stories: The Devil Rides Out and the works of Alastair Crowley inform the Burgess sequences, whilst the gates of the Dreaming (the Gates of Horn and Ivory) are straight out of Homer and Virgil. Gaiman's use of established DC characters such as John Constantine and Dr. Dee was also an obvious strategy to attract other DC readers, but for those unfamiliar with the DC Universe, their appearance and the assumption of familiarity is a bit jarring.

Preludes and Nocturnes (***½) is an intriguing opening to the series, ranging from mythology to the occult to superheroes (and villains) and back again, taking in multiple times, worlds and characters. It is a powerful work of the imagination, but in places feels constrained by being part of the DC Universe and has a few rough edges, the result of a writer near the start of his career but already showing great promise. The collection is available from Titan in the UK and from Vertigo in the USA. The collection also forms part of The Absolute Sandman, Volume I, which is a handsome leather-bound edition of the first 20 issues of the comics series and comes complete with extra material. This edition is available from Vertigo in the UK and USA.
Posted by Adam Whitehead at 12:54

Email ThisBlogThis!Share to TwitterShare to FacebookShare to Pinterest
Labels: neil gaiman, preludes and nocturnes, the sandman

Goodness, a reasonable review of the first Sandman volume. I bought it, expecting "one of the best of the series and a masterpiece of literature", trusting the chorus on Amazon and other places. What I got was some originality with a lot of ordinary horror on Stephen King-TV level and mostly uggly drawings, apart from Dave McKean's brilliant covers.
The best chapter, or the good chapter, was the epilogue, which convinced me not to give up on this.
(My one-year Sandman-break until now was finally initiated by the series-killer-convention (Subtle! Enchanting! *roll-eyes*) in the second volume.)