The Briar King by Greg Keyes

Greg Keyes first came to prominence a decade or so ago, with his Age of Unreason quartet and his duology consisting of The Waterborn and The Blackgod. There was some concern that spec fic had lost a very promising author to the siren call of media tie-ins, as Keyes then moved on to produce some of the better Babylon 5 and Star Wars tie-in novels, but in 2003 he bounced back with his take on epic fantasy, The Kingdoms of Thorn and Bone, a four-volume series of which The Briar King is the first novel. 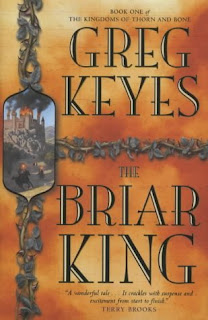 The Kingdom of Crotheny is facing rising tensions with the great kingdom of Hansa to the north. In the King's Forest there are rumours of monsters and banditry. The royal court is infested with treason and intrigue. Even the church is tainted by the growing corruption. Rumours abound of the imminent return of an ancient god, the Briar King, whose resurrection will portend the end of the world. Several characters are caught up in the growing chaos, and we follow their stories as the world enters a great period of uncertainty and conflict.

It sounds like epic fantasy by numbers, but Keyes writes his story with refreshing enthusiasm and vigour. His characters are well-drawn and understandable, the storyline is told well and there's a strong infusion of both Celtic and Mediterrenean influences into the more traditional northern/western European medieval fantasy ideas on display here. The result is a book that in summary sounds like every other epic fantasy you've ever read, but in the reading turns out to be enjoyable, and a real page-turner to boot and some real shocks and surprises along the way. Keyes isn't afraid to kill off major characters or upset the status quo in a major way.

The Briar King (****½) is one of the best opening volumes to a fantasy sequence I've read in some time, and will be reading the sequels in short order. The book is published by Tor in the UK and Del Rey in the USA, and is followed by The Charnel Prince, The Blood Knight and The Born Queen, all available now.
Posted by Adam Whitehead at 13:20

Email ThisBlogThis!Share to TwitterShare to FacebookShare to Pinterest
Labels: greg keyes, the briar king, the kingdoms of thorn and bone

Glad you enjoyed it. Keyes is easily one of the most underread authors in Epic Fantasy and I can't help but smile each time someone picks up The Briar King and enjoys it.

Can't wait to hear what you think of the rest of the series.

I have the book sitting on my shelf; your review just nudged me to blow the dust of the cover sooner than later :)