The third Sandman collection represents a change of pace from the first two. Whilst the first two were unified by a central story arc that ran through each one, Dream Country is essentially a short story collection, featuring four tales that although self-contained, do illuminate parts of the backstory and the ongoing overall storylines of the entire series. 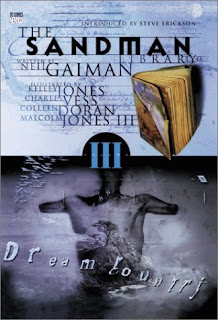 The first story is Calliope. A young writer, Richard Madoc, has a bad case of writer's block following the success of his first novel. In desperation he turns to the occult to find a way out of his problem and enlists the help of Erasmus Fry, an elderly author and successful playwright. It turns out that Fry owes his success to his imprisonment of Calliope, one of the nine muses of antiquity (and the former muse of Homer), and he passes control of Calliope over to Madoc. By holding her hostage and abusing her, Madoc gains the inspiration he needs and becomes a bestselling writer, churning out novels, a poetry collection, screenplays and even becoming a gifted director. Unfortunately for Madoc, he is unaware that Calliope is also the former lover of one of the Endless...

This is an interesting story. The notion of 'the muse' is explored here, although the literal personification of Calliope can be substituted for whatever a writer uses for inspiration. The abuse and over-use of the muse resulting in a horrendous case of writer's block, perhaps permanantly, is an interesting idea to use for a story, but it works well. We also get some intriguing backstory for The Sandman overall, including the tantalising revelation that somewhere out there Morpheus has a son (although those who know their Greek mythology will be way ahead of the game here). For those interested in writing graphic novels and comics, the complete script for Calliope is included in the book as well.

The second story is much more straightforward and fun. The Dream of a Thousand Cats sees a cat travelling the world, preaching a message to all the other cats, and we see the impact of that message on a young kitten. This story has been called 'cute' but it really isn't. The dream the cat is trying to bring into reality really isn't very nice (especially for humans) and the final line and image are brilliantly contrasted with what is going on in the cat's mind. This is as self-contained as Sandman stories come, and shows Gaiman's wit and imagination in full flower.

The third story is the legendary A Midsummer Night's Dream. Back in Men of Good Fortune (included in The Doll's House), Dream and William Shakespeare made a deal whereby Dream would give Shakespeare access to a font of imagination in return for Shakespeare writing two plays for him. A Midsummer Night's Dream is the first, written for Dream to show as a piece of entertainment to the real faerie king and queen, Auberon and Titania, who return to the mortal plane with their retainers for the occasion.

This is a splendid, clever story which rightfully won the World Fantasy Award in 1991. As the play unfolds events offstage are illuminated by it: Titania's enchantment of Shakespeare's son (who died several years later), Robin Goodfellow (Puck)'s irritation at being portrayed by a mortal and the running commentary provided by several of the faerie court viewing the play, with some disagreement about whether they should congratulate the mortals for their art or eat them. There's also some more scene-setting for later stories (an invitation is extended to Dream who hasn't followed up on it by four centuries later). The highlight of the collection, this is an amusing story, although probably of most interest to established Shakespeare fans.

The final story is Facade, about an extremely obscure DC hero who finds herself lost and lonely, living in her apartment with a weekly conversation with the guy who signs her pension cheques as the highlight of her week. This is a somewhat bleak story about a hero with the power to save the world but who loses herself in the process, but it is given an uplifting ending by the arrival of Death, who is fleshed out a lot more here than in her previous brief appearances.

Dream Country (****) is an excellent addition to The Sandman mythos, although it can be criticised for being on the short side (collecting only four issues, compared to the previous two collections' eight apiece) and only padded out to a reasonable length by the Calliope script. But the quality of the actual stories more than makes up for it. The collection is available from Titan in the UK and Vertigo in the USA, and rounds off The Absolute Sandman, Volume I, available from Vertigo in the UK and USA.
Posted by Adam Whitehead at 15:02

Excellent review! I've been immensely enjoying my Sandman reread, and this one was a good one. I enjoyed reading your thoughts on each of the stories.