Thirty years after his trip to Earth in Altered Carbon, ex-Envoy Takeshi Kovacs is fighting for the mercenary unit known as the Wedge in a dirty little war on the planet Sanction IV, between the ruling corporate cartel and the pro-democracy separatists under Joshua Kemp. After being killed and 're-sleeved' one time too many in the conflict, Kovacs is made an offer he can't refuse: to arrange an expedition to recover the most valuable alien artefact in history, a prize that people are willing to kill for, even commit genocide for... 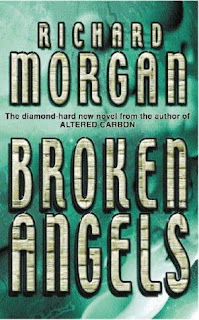 Broken Angels is the middle volume of the loosely-written 'Takeshi Kovacs Trilogy', although it is a stand-alone novel. There are a couple of very vague references to the events of Altered Carbon, but not as many as there are to Kovacs' activities between the novels. Kovacs has been a busy lad, and the man we meet in Broken Angels, although still the same brutally efficient warrior, is somewhat more layered and interesting than the character we met earlier.

Broken Angels is an improvement on Altered Carbon, although it is also a rather different kind of novel. Whilst Altered Carbon was a hard-boiled detective story with elements of noir, Broken Angels is more of a war story, focusing on special operations and mercenaries. Kovacs has a number of allies and is a member of a team this time around, contrasted to the lone wolf operative of Carbon. Whilst the first-person perspective means we get less time with the other characters as we would in a third-person story, Morgan paints Kovacs' new allies quite vividly, giving them decent introductions and motivations.

As with Carbon, this is a hard-edged, violent story which lurks in a grey morass of conflicting morals and ethics. There are double-crosses, deceptions and murky allegiances aplenty. The story twists and turns but never feels contrived, a tribute to Morgan's writing skill. The book also brings some new ideas to the table. We get much more information about the mysterious aliens whose ruins humanity has spent five centuries picking through, and there is a 'big dumb object' in the finest traditions of hard SF which makes the final third or so of the novel fascinating.

Broken Angels (****½) is a fine SF novel, with a sophisticated and well-developed storyline featuring flawed and in some cases broken protagonists who are all too human. The book is available now from Gollancz in the UK and Del Rey in the USA. I have also reviewed three of his other novels: Altered Carbon, Black Man and The Steel Remains. The third and final Kovacs book is Woken Furies, which I hope to get to in the near future.
Posted by Adam Whitehead at 15:48

There's a paragraph in Woken Furies that explains the whole reason for Broken Angels.

Hurry up and get to it!