Season 2 of the new Battlestar Galactica begins immediately following the events of the Season 1 cliffhanger. A Raptor has crashed on Kobol and the survivors are being menaced by Cylons. On Galactica, Commander Adama has been shot by a Cylon sleeper agent and lies at death's door, leaving the flaky, alcoholic Colonel Tigh in command. President Roslin has been deposed by a military coup and is confined in Galactica's brig. Meanwhile, Starbuck has, against orders, taken a captured Cylon Raider back to Caprica to find a mythical artefact. And that's just for starters... 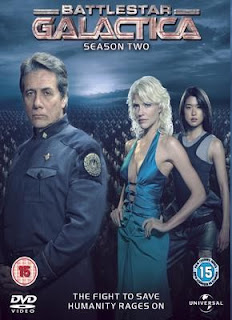 Whilst Season 1 of BSG consisted of a long story arc made up of entwined threads that culminated in the season finale, the second season consists of shorter arcs which are much more heavily serialised across a smaller number of episodes. The first seven episodes of Season 2 are based around resolving the Season 1 cliffhanger and form an exciting, tense storyline which tests the characters to their limits. Colonel Tigh is put on the spot and found wanting, whilst both Apollo and Starbuck find their loyalties repeatedly tested and Baltar's acceptance of his destiny against the instincts of his more practical and scientific side results in an intriguing struggle. Once the aftermath of Season 1 is dealt with, we are barely given a pause for breath as the three-part Pegasus arc kicks off. There is a school of thought that Pegasus itself is the best episode of the entire series, perhaps challenged only by Season 1's 33 and Season 3's Exodus, Part 2, and it's hard to argue with that. As a bonus the DVD edition is the extended 56-minute cut, with far more character development and background information than we've seen previously.

Following the conclusion of the Pegasus arc in Resurrection Ship, Part 2, the show ill-advisedly takes some time out to do some stand-alone episodes. Roslin's reprieve from her cancer in Epiphanies is well-acted, but tremendously contrived, whilst Black Market is something of a mess, and is producer Ronald D. Moore's least-favourite episode (although frankly it's far better than Hero or the truly irredeemable The Woman King from Season 3). Black Market is a throwback to early Season 1 which dealt with the social, political and pragmatic challenges facing the fleet, but this late in the day with far more interesting stuff going on it feels like a waste of time, and the flashback sequences are unfocused and rather dull. Scar is better, as Kat and Starbuck compete to see who can take down an ace Cylon Raider, but again the flashback sequence makes the episode more confused than it needs to be. Sacrifice is notable for the highest-profile killing of a regular character to date, but is rather predictable.

Season 2 returns to form with The Captain's Hand, a no-nonsense action story which gives Apollo something to do after a prolonged brush with depression and we get to see what the Pegasus is really capable of when cut loose, resulting in some very nice CGI, although the continuously-doomed nature of the Pegasus COs is becoming a bit of a riff on Murphy Brown's secretaries. Downloaded is a pivotal episode, giving us the Cylon point-of-view for once whilst the fate of Sharon's hybrid baby is debated and nuked-out Caprica is revisited. The two-part season finale, Lay Down Your Burdens, is the series at its best, mixing politics (Baltar's run for the presidency receives a shot in the arm after the discovery of a habitable planet protected from the Cylons' sensors by a nebula), action (Starbuck's long-gestating plan to return to Caprica to rescue the resistance members is finally carried out) and genuine surprises (the last of the 'significant seven' Cylons is revealed) before we get to the final 15 minutes: a totally unexpected year-long jump forwards in time that ends on the biggest cliffhanger to an SF TV show since Picard got Borgified.

After debating about the final score for the season, in the end I opted to give Season 2 maximum marks. Yeah, there's four fair-to-middling episodes, but nothing that's actually unwatchable, and the overwhelming quality found elsewhere more than makes up for it.