The Sandman Companion by Hy Bender and Neil Gaiman

Back in the pre-Internet days, it wasn't uncommon to see 'companion' books to television series, movies, sometimes series of novels, taking up space in bookstores, providing episode guides or character biographies or A-Z guides. Since the advent of the Internet these books have been gradually disappearing. Why go and spend £7 on a book about, say, Lost when you can look up the same information online for free, and discuss it with other fans? To stay in the game companion books need to deliver far more original, exclusive information that cannot be found elsewhere, and The Sandman Companion is a splendid example of this. 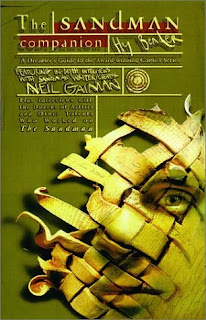 The Sandman Companion consists of plot summaries of the ten graphic novel collections that make up The Sandman series, as you may expect. However, the meat of the book is an extraordinarily long interview between the author, Hy Bender, and Neil Gaiman. Divided between the ten collections and several shorter chapters on characters, the origins of the series and so on, this interview delves deep into each story, examining the motifs, themes and imagery that Gaiman wanted to explore, investigating what worked and what didn't. Gaiman goes into particular detail on the classic story A Midsummer Night's Dream, going through the issue line-by-line and panel-by-panel to show what he was try to accomplish with this one particular story. It's a fascinating read and an invaluable resource to have at your side when you next reread the series.

The book also features interviews with the artists that worked on the series (including several with iconic cover designer Dave McKean), as well as letterer Todd Klein and editor Karen Berger. Several other SF&F luminaries also chip in, such as Alan Moore, Gene Wolfe, Harlan Ellison, Samual R. Delaney and others, all offering opinions on why the series works and what has made it such an enduring classic of modern speculative fiction.

The Sandman Companion (****), originally published in 2000, is an invaluable resource for fans of the series and features the most extensive look yet into the minds of one of our best modern SF&F authors. It is available from Titan Books in the UK and from Vertigo in the USA.
Posted by Adam Whitehead at 12:17