The Blood Knight by Greg Keyes

The third and penultimate book in The Kingdoms of Thorn and Bone series, The Blood Knight resumes the story where we left off in The Charnel Prince. Robert Dare, the late king's brother, has usurped the throne of Crotheny. He has imprisoned his brother's wife, Muriele, but has been unsuccessful in capturing or killing her lackwit son or youngest daughter, Anne. Meanwhile, Anne has overcome numerous obstacles and returned to southern Crotheny, which she begins the difficult task of winning some of the noble lords to her cause and raising an army. The monk Stephen's path leads him into the east to find knowledge that will aid in combatting the rising evil in the land, whilst the former royal holter, Aspar, will likewise find his destiny taking him into the wilds to a final confrontation with the mystical Briar King. 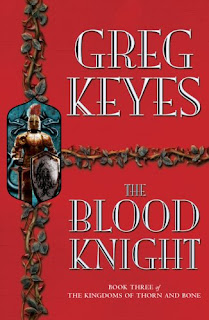 From the start, The Blood Knight feels a little uneven. The story takes a while to speed up again as we are, at length, reintroduced to characters from the previous books and what they are up to. This takes some considerable time. Once the plot gets going again, things get more interesting, paticularly as we get to the biggest battles in the series so far (although these are mere skirmishes rather than large set-piece engagements, which I suspect will be held back for the final volume). However, the writing feels a little less confident than in the first two volumes. Things are not as tight, whilst the inexplicable need to end every chapter on a cliffhanger gives the book a juddering pace which makes reading it at times mildly frustrating. Also, the extreme passivity of characters such as Aspar and Stephen becomes grating. They are both carried along by events outside their control, constantly second-guessing themselves and the people they need to trust. The moment when Anne, who was going the same way, breaks free and starts making her own decisions rather than blindly following some ancient prophecy, is extremely carthartic for that reason. One disappointment is that Leoff, given his importance to the second book, is extremely inert for this volume and doesn't accomplish much, whilst Muriele is pretty much absent, although given her conditions that is perhaps not surprising.

The Blood Knight is the weakest of the three books so far. The decline in quality of the series across its length was something I'd been pre-warned about, but is still regrettable. That said, even at this stage the core storyline remains interesting, the characters mostly sympathetic and, most importantly, the story remains intriguing enough to make you want to read on into the final volume, The Born Queen.

Email ThisBlogThis!Share to TwitterShare to FacebookShare to Pinterest
Labels: greg keyes, the blood knight, the kingdoms of thorn and bone

i joined the forum fire and ice and was activated but i'm having a problem with the features.Could not pm you there.Saw your comment re COH.
My husband just loves this game.
He put up a forum JUST FOR COH called COH Crossfire.i thought since you were a big fan you might want to stop by!